Earlier today, former members of Momentum Youth and Students Committee (mostly elected in June 2016 at its founding and so far only conference) and Momentum Youth and Students London Committee received an email from the Chair of Momentum’s NCG, Jon Lansman informing them that they should “cease to use Momentum’s name”, as neither structure has constitutional status in Momentum and has not been recognised or verified by the National Coordinating Group. Additionally the email noted that the Momentum Youth and Students’ social media accounts have “brought Momentum into disrepute” and acted in a way inconsistent with Momentum’s Code of Ethics. (It is worth noting that the majority of MYS committee had no access to the social media of the organisation at any point during our existence).

This email merely confirms the pre-existing position of the National Co-ordinating Group, as confirmed by the action report of the July meeting of the body: “Momentum Youth and Students – it is not an active body and has no status within Momentum’s constitutional arrangements”.

As former MYS Committee members, we would like to interrogate how we got here, if only to provide some useful lessons in the future of youth organising. 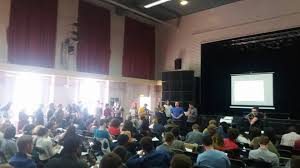 MYS’s founding and so far only conference, June 2016

We’d note that the assessment of the NCG that MYS is not an active body is entirely correct: we have not had a committee meeting since November 2016. To highlight how non-functional this organisation was, the minutes of the November meeting were only circulated in March 2017, four months later, and after we were supposed to have organised a conference in February for a constitution to be voted on and for a  new committee to be elected.

Whilst Momentum mobilised thousands of people to canvas in the General Election in 2017, the only ‘activity’ of the Momentum Youth and Students Committee during the election was an online Facebook vote on a Sunday evening to remove some of its committee members for being members of other socialist organisations which support Momentum and Labour!

In the midst of this organisational paralysis, we have seen an increasingly hostile political culture characterised by a thuggish hostility to “Trotskyists” and indeed to any critically minded leftists, denunciation of even the most mildly put critical analysis or attempts to debate issues, putting sectarian vendettas above practical cooperation and campaigning, making bad-spirited jokes out of serious issues, and general uncomradeliness.

For us, the lessons are clear. The only way out of this rut are youth structures that are democratic, vibrant and active. Principled left wing politics and comradely co-operation have to take the place of sectarian chicanery and personal vindictiveness.

In my capacity as Chair of Momentum’s National Coordinating Group (NCG), I wanted to clarify that as Momentum’s Constitution does not specifically provide for the continuation of the entity previously known as ‘Momentum Youth and Students (MYS)’ and nor has the NCG recognised nor verified it or any related regional groupings (such as MYS London), MYS currently has no validity within the structures of Momentum, and therefore no legitimacy to use Momentum’s name or logo. In addition, I wanted to note, with regret, that the MYS social media accounts have at times been used in ways which have brought Momentum into disrepute and which are inconsistent with Momentum’s Code of Ethics, which seeks to promote values consistent with those of Jeremy Corbyn’s two leadership campaigns, “of fair, honest debate focused on policies, not personal attacks or harassment.”

In future, in line with the Momentum Constitution, the NCG may decide to encourage the development of liberation networks for women, BAME, disabled and LGBT+ people, and of Youth and Student networks in which members who self-identify as being within these categories are able to self-organise, and individuals and groups of individuals may approach the NCG to request support in the development of such networks. The formalisation of any such networks would follow discussions about their desired purpose, structure, ways of working and culture and the NCG would have final authority over whether to approve any such group. We would obviously welcome views about how these might be structured and encouraged.

In the meantime, given that ‘Momentum Youth and Students’ has no formal recognition from the NCG, whilst bringing the organisation into disrepute on social media, for the time being I respectfully ask those involved to cease to use Momentum’s name, and to close down the social media accounts or hand them over to a member of the national office team: Laura Parker, National Coordinator of Momentum, is copied into this email and will be happy to liaise with those who are currently administering these accounts.

Thank you in advance for your cooperation.