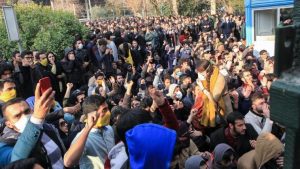 This CLP notes the popular protests which have erupted in Iran since 28 December.

These protests seem politically varied, but two strands are clear: demands for democratic rights and freedoms and demands for better living standards.

We stand in solidarity with those in Iran fighting for the right of workers and others to organise, for higher living standards, for a democratic republic and free elections. We oppose the repression currently raging and call for the release of political prisoners. We oppose Western military threats and economic sanctions.

We ask our EC to discuss how we can make links with Iranian working-class and left activists fighting for these goals; and the NEC to do likewise. We call on the party and its leadership to make vocal and unambiguous solidarity with such forces.

The Islamic Republic of Iran, which emerged from the religious fundamentalist hijacking of the revolution which overthrew the Shah of Iran in 1978-9, is a brutal regime in which workers’ organisations and the left are very extensively suppressed. Workers risk their lives by engaging in the most basic forms of organising. The regime also represses women, LGBT people, national minorities, etc. Under cover of anti-imperialist rhetoric, it engages in blood-soaked imperialist interventions, eg in Syria.

An important cause of the protests is the drive to privatise, cut subsidies, push down living standards, etc, which the regime has been engaged in for years, enriching capitalists and state officials at the expense of the mass of Iran’s people.

In recent days the regime has arrested thousands, many of them left-wing activists. At least three have already died in prison.