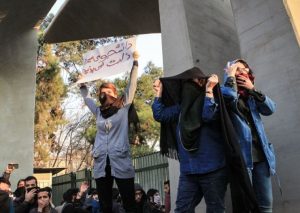 The following motion was passed unanimously at a meeting of 60 Labour Party members at Stretford and Urmston CLP in Manchester on 5 January.

This CLP supports the working class and popular protests in Iran that started in the city of Mashad on 28th December 2017 and which have since spread to over 40 cities in the country.

We note that the protests:

• Directly oppose poverty and the systematic corruption of the “Islamic Republic” regime.
• Include the wide participation of working class people – men and women – many of whom are young and unemployed.
• Demand an end to the “Islamic Republic”, the end to rule by “Supreme Leader” Khamanei and “President” Rouhani and the dissolution of the Revolutionary Guards Corps.
• Demand an end to military interventions in Syria and Lebanon.
• Call for freedom for political prisoners in Iran and an end to the dictatorship.

We therefore call on the National Executive Committee and Party leadership to:

• Support the protests and the calls for workers’ rights and an end to repression and dictatorship.
• Support campaigns in solidarity with political prisoners in Iran such as the Solidarity with Middle Eastern Prisoners campaign organised by The Alliane of Middle Eastern Socialists who are calling for the release of: Reza Shahabi from the Tehran Bus Workers’ Syndicate; Narges Mohamnadi from the Centre for Defence of Human Rights in Iran; and Zeynab Jalalian, a Kurdish women’s’ activist.
• Cease any co-operation between the Party or Labour MPs with “Press TV” – the English-language arm of the clerical-fascist regime in Iran.
• Urgently investigate how best to co-operate with and support worker and popular organisations in Iran who share Labour’s commitment to socialism and freedom and build support for their activities.