During the last ten days, the people of Iran proved that the memory and dreams of their 1979 revolution is still alive and kicking! That although betrayed and hijacked, the social demands of that revolution is still valid and can cause mass protests!

These protests are the most wide-spread protests against the entirety of the establishment since 1979.

The neoliberalisation of Iran’s economy had started during the post-war government of Hashemi Rafsanjani. However, Rouhani’s current “moderate” government has increased the speed of this process to an extent that it has become almost impossible for the large working-class population to continue living.

During the last year there were hundreds of small civil protests around the country. Those protests were entirely working-class protests about unpaid wages, living standards, unemployment etc. None of those protests met an adequate answer by the government. 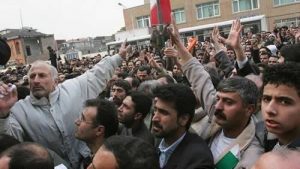 The Haft Tapeh sugarcane workers, who have a long history of struggle, have called for strikes and protests on Sunday 7 January, with the slogan “Bread, jobs, freedom”

The current wave of protests started in the “holy” city of Mashhad in Eastern Iran. Once again, the protest was about the economy, inflation, living standard etc. That protest immediately spread all around the country mostly in small very deprived towns. Even the “holy” city of Qom, a clergy hotspot, joined the protests. Unlike 2009’s Green Movement which had a middle-class reformist base and started in big cities, these protests started in towns and cities other than Tehran. Tehran only joined afterwards with students at the forefront of protests. So far at least 65 towns and cities have joined the protests.

Protestors from the start targeted the whole system and not just one faction. They immediately faced the iron fist of the state. Police, riot guards, Basij (Islamic militia), IRGC (Revolutionary Guards) and the plain clothed (intelligent services) didn’t lose any time to come to streets. They started violently beating the protestors and in some areas shooting at them. Protestors naturally defended themselves and organised themselves for more radical protests. In many areas protestors attacked police stations and Islamic militia bases, and set them on fire. Large banners with pictures of the supreme leader were also taken down or set on fire.

All factions of the State from the fundamentalists to moderates and reformists condemned the protests and called for tough response. Khamenei the supreme leader, Rouhani the president, Khatami the reformist leader and generally the whole establishment put the blame on foreign countries such as Saudi Arabia, Israel and US. No one addressed the actual internal roots and demands of the protests.

At least 23 people have died so far and more than 1,700 have been arrested.

Left-wing students and especially members of student councils who had been very active during the last year are paying a high price at the moment. Many of them were arrested after the security forces surrounded their universities and arrested them either when they tried to go get out of their universities or kidnapped them from inside the campus. Many other students are now being hunted and kidnapped by plain clothed security forces from their homes, dorms and workplaces. All of them face torture. The state as usual will try to force the students to confess in front of TV cameras and then they will use those confessions as basis for heavy sentences.

Some of the slogans that were chanted during the protests:

Students would rather die than accept humiliation

Capitalist mullah, give us back our money

People beg while the supreme leader acts like a god

We would die but we would take Iran back

We are the children of war, we are ready for battle

Down with the Islamic Republic

Down with this deceiving government

Down with the dictator

You have used Islam in order to oppress people

All political prisoners must be released

So far at least 90 students have been arrested/kidnapped. These students face brutal tortures which is commonplace in Islamic Republic prison. They need international support. Pressure must be put on Iran’s security forces for their release!

Here are names of 50 arrested students we know so far (this list will be updated):