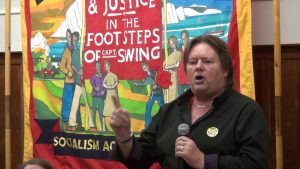 Ian Hodson is National President of the Bakers, Food and Allied Workers’ Union – a left-wing, Labour-affiliated union that recently organised strikes in McDonalds and has also just affiliated to Momentum. He spoke to The Clarion just before Christmas.

The Bakers’ Union is one of the Labour Party’s most left-wing and vocal affiliated unions. Obviously there’s been major progress, but what do you think needs changing in the party?

Firming up the policies and expanding on them is essential. It’s the policies that have really engaged people, as we saw in the general election. You need policies that inspire people as well convincing them their lives can be better. Now, I watched an interview with Jeremy Corbyn recently where he said if he wanted to be remembered for one thing it would be ending homelessness. We’re six months after Grenfell, the right to a decent home should be key. A real policy on that needs to be nailed down – it would really change lives and win huge support. We don’t just want “affordable homes” – we want quality council housing with real secure tenancies. That will also help undermine a lot of the divisions we see in our communities, where people have blamed other working-class people and fallen prey to the right.

I should also say something about climate change. It’s excellent we’re committed to ending fracking. We’ve got to develop renewable energy, looking at progress in other countries, like Germany. We need a system where communities are able to generate their own power and push out the big energy companies. There’s a problem with nationalising them in that their set ups are very focused on fossil fuels and also I for one don’t want to put any more money into their pockets.

And then, the one you were expecting me to say, workers’ rights. We need to look at how we get strong rights in modern workplaces. We need to come at it not from a union bureaucracy point of view but the point of view of the shop floor, about how do people get some power and get to have a real say in what happens in their workplace. Of course, that has to mean repealing all the anti-union laws – we need to explain patiently why this is essential for the labour movement.

In terms of how the party works, as a union officer I have to stand for election every five years. At end of a five year parliament, members of a CLP should be able to demand the same. MPs are the ones who’ve allowed a situation of insecure employment to develop, yet they demand complete security for themselves, exempt even from democratic scrutiny. Let’s see it the other way round. Our MPs need to represent the party and the movement, not themselves.

Labour should be a party of the unions, based on the unions, but I’d want that movement to be well rooted in our communities, in the working class, not just a party of the Westminster bubble where people are making policies with no reference to working people’s lives and interests. More power locally is essential, not through mayoral systems, absolutely not, but perhaps regional government and certainly re-empowering local government. At the moment councils aren’t fit for our communities, they are tools of central government.

BFAWU has just affiliated to Momentum. What motivated you?

We’ve previously been involved with other left-wing Labour bodies, including affiliation to the LRC. During the election we recognised that Momentum was a real force, bringing lots of people back into politics and even more people into political activism for the first time. Its general aims and aspirations are strongly in line with what our members want and the kind of things that meet their interests and needs as well as those of the wider public. So, it just seemed to make sense. We’ve been working with Momentum for quite a while but we thought, why not take part in its structures and decision-making?

You must be aware that many on the left have serious concerns about the suppression of democracy in Momentum and its political trajectory in a rather moderate direction?

Every movement has issues. Momentum has had a tough couple of years, with people under siege in the press and so on, and I suspect there’s a mentality of battening down the hatches. To be clear, I believe and my union believes that democracy is essential in the labour movement. Inside Momentum we will argue clearly for democracy, for democratic structures and for people’s right to be heard.

What do you think are the most important struggles going on at the moment?

I take my hat off to the UVW and the IWGB. The job they’ve been doing in London with some of the most impoverished and exploited workers, as small unions who have a much more difficult job than the big unions and even than our union, it’s absolutely immense. I also think we’ve played our part, in that the McDonald’s strike has also made history this year. Those workers are playing a role, potentially, in the rebirth of the labour movement, by showing the unorganised can be organised. Most of them under 25, a lot of them under 18, but they’re standing up – it’s incredible, I take my hat off to them. And of course the Picturehouse workers, going at it for over a year. There’s the women in Durham, the teaching assistants, what they’ve done is incredible too.

How do we get the Labour Party, at different levels, moving in support of workers’ struggles?

I’ve been to a lot of CLPs recently, talking about how do we engage McDonald’s workers, KFC workers and everyone else. We’ve done work together signing people up so they have a chance to vote, because so many young workers aren’t plugged into it. We took CLP chairs and secretaries to workplaces and they were surprised how easy it is to engage with people. We have to show it can be done. There’s a big chance now to engage many more people both in our trade unions and in socialist politics. We need communication, discussion, patient explanation on doing it.