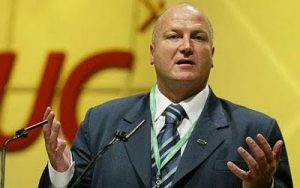 In 1998, in their pamphlet Reclaim Our Rights – Repeal the Anti-Union Laws published by the campaign of the same name, Bob Crow (then RMT assistant general secretary) and John Hendy QC wrote:

“In order for the unions to fulfil the purpose of maintaining and improving the conditions of their members’ working lives, unions have to have the legal freedom to operate. That means they must demand that the anti-union laws are repealed.

“No doubt the demand for repeal will draw contempt, criticism and scare stories from the press. But the arguments in favour of repeal and replacement are formidable and irrefutable. Furthermore, the movement has its own culture, history, images and analysis which are as persuasive as anything the media can create.

“More importantly still, if the movement does not go on the offensive with its ideas and vision, there is left a void which is filled only by the ideas and vision of its enemies.

“The demand for replacement of the anti-union laws must be pressed whether or not it is approved of by Mr Murdoch and his media empire which has such a formidable influence on Mr Blair. There is no reason for the labour movement to feel that it should not make demands of the Labour Government. That is its job!

“The labour movement should pursue a campaign for repeal and replacement with enthusiasm and energy. The movement has faced worse laws before and overturned them. Those familiar with labour history will know of the incredible achievements of getting the Trades Disputes Act 1906 [which established the legal immunities for strikes and industrial action largely destroyed in the 1980s] onto the statute book and getting the Industrial Relations Act 1971 [a test run for Thatcher’s anti-union laws] off it.”

That task remains for us today!