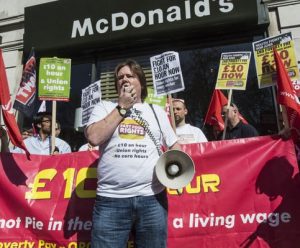 The Labour Party was founded by trade unions, not the other way around, and the trade union movement in the UK is already the most transparent and democratic organisation in the world. When any politician starts talking about ‘reform’, the klaxons start blaring as history tells us that this usually means the dilution, erosion or total dismantling of a system for ideological gain.

So far what we have seen, however, from the current Labour leadership is recognition of the important roles that unions play inside the Labour Party and the significant contribution we make together in ensuring that the Labour movement is political, progressive, and organised on the ground. The BFAWU’s Executive Council would envisage that any changes being discussed ensure we are inclusive and transparent. The BFAWU opposed the Collins Review, as it was undemocratic and failed to engage with grass-roots trade unionists (or Labour Party members for that matter). That being said, I do acknowledge that one of the ‘accidents’ that wasn’t envisaged was the possibility of getting a Labour leader elected who represents both the Party and the wider movement.

Up until the election of Corbyn, delegates at our Annual Conference debated our affiliation to the Labour Party and whether or not it should be reviewed. The members present, who work in the food industry and are amongst the lowest paid in the UK, discussed how they felt about the current state of political representation. The decision to remain affiliated to Labour didn’t centre on how the Party leader was elected, which Collins appeared to do. Indeed, when speaking to members around the country, that issue was seen as naval-gazing, relevant only to a small number of people in the Westminster Village who were aggrieved that their man didn’t get the job. At that time, they were referring to David Miliband. The BFAWU’s message to those people and media alike then was “get over yourselves, it’s called democracy; Ed won.”

The main issues discussed by BFAWU delegates, centred on employment rights, rent controls, affordable housing and ending the increasingly blatant privatisation of our NHS. They felt that continued affiliation to the Labour Party would leave our Union better placed to address those issues in the political arena because of our collective link and voice within the Party. Our union firmly believes that the creation of the Labour Party made the political representation of the working class possible. In our opinion, that relationship with the working class is absolutely vital if the party is to represent the interests of working people. We know that none of the other main political parties will.

In many ways, our demand to create a mass party by concentrating on policies has proved to be correct. Our argument at the time of Collins was that we needed to engage young people. This was something that was apparent to us as we went around the country organising fast food workers. We called for and end to the demonisation of welfare claimants and sought to address the fact that working people are only one serious accident or illness away from ending up on benefits and one financial catastrophe away from redundancy.

If we want to seriously engage with people and bolster Labour Party membership, it won’t be achieved by documents reforming the trade union-Labour Party link to remove unions or activists from playing a democratic role within our party, or demonising one group or another. The best way to build and galvanise the Party is through engagement and the democratisation of its structures, including the mandatory re-selection of MPs. The union link should be maintained and strengthened. We need to ensure that all unions affiliated to Labour play a role, not just the big ones. I struggle to understand exactly why it is necessary to hold a beauty contest at Labour Conference in order for unions to have a seat at the table. Surely it would be fairer if we all had a seat.

I think it’s important that we don’t get sucked into a naval gazing vacuum. We must concentrate our fire on the real enemy: the Conservatives. The last election proved that when we offer a real and clear alternative to the status quo, in a language that is easy to understand, people will engage in politics. I believe that Labour will transform our country and this will be achieved by stopping the relentless war on the most vulnerable in our society and by dealing with the welfare bill through a policy of full employment. We’ll also engage with people a lot more easily by tackling the issue of poverty pay, which means that working people have to rely on state hand-outs in order to live. People want affordable housing and the ability to live and work with dignity and fair pay. These are the issues that people are facing every day, and they are the issues that have traditionally made up common ground between the Labour Party and trade unions.

There would be no Labour Party without trade unions; we have earned the right to decide our own structure and deserve to be consulted in any ‘reform’ discussion in relation to the political party that we helped to form.