Clarion editor Sahaya James, who sits on the Momentum National Coordinating Group, has put her name forward to be the Momentum-backed candidate for the Youth Representative on the Labour Party’s NEC. Here she explains why. To contact Sahaya email sjames416@gmail.com

The summer saw tens of thousands of new young members join and campaign for Labour’s manifesto, and millions more excited by the ideas within it and the society it hinted at.

Now is a crucial moment for Labour’s youth movement. We have a huge and wildly exciting opportunity to draw these people into the labour movement and Young Labour can play a big role in this. To transform Young Labour into a confident, combative, free thinking grassroots force for socialist politics on our streets, communities, workplaces, schools, colleges and universities we need to push hard for autonomy and democracy on a national level, and the support and resources necessary to build and strengthen active Young Labour groups at borough and constituency level too.

Young Labour groups have the potential to be the lively, accessible, welcoming spaces we desperately need to campaign on local and national issues, debate big political ideas and do political education, and build the struggles happening in our workplaces, communities and educational institutions and help young people kick start new ones where they don’t already exist.

A energetic and bold Young Labour movement must be part of the wider push we’ll need if we’re to genuinely transform the Labour Party into the democratic, campaigning, member-led force it needs to be in order to deliver on the policies that so inspired people, particularly young people, in the general election – let alone go further so we can think about transforming society in a socialist direction. We need to make conference the sovereign decision-making body of the party, so that ordinary members debate and decide policy. We must demand an end to the system by which Corbyn-supporting activists are arbitrarily expelled, whether because they once supported another party before they joined Labour or because they are members of a socialist group within the party. We need to put an end to the situation where branches and whole CLPs are shut down, whether by bureaucratic command or by their right-wing officers just not allowing them to meet. We need a thoroughly democratic, pluralist party, in which differences within the broad framework of Labour values are dealt with through debate, not bans and persecution.

Young Labour itself also requires democratisation. We need an annual conference which every local group has the right to send delegates to; YL sabbatical officers and adequate national administrative support; and much greater ability to feed into the party at every level, from CLPs to national conference.

Transforming the party doesn’t only mean opening up its democratic structures to its membership but a serious and active commitment to meaningfully dealing with bigotry, bullying and harassment in place of the lip service and tokenism that too often characterises how these systemic issues are spoken about and handled. From tackling sexual harassment to acknowledging and confronting the anti-semitism that exists on the left. From the rife transphobia found in the Labour Party just as in wider society most recently evidenced by the treatment of Rochester and Strood CLP’s Women’s Officer Lily Madigan to unapologetically condemning the party for it’s active or passive complacency in matters of state violence whether behind closed doors in detention centres like Yarls Wood or on our streets where racist stop and search still prevails and the police routinely defend the far right all while Corbyn speaks of investment in the police force. We need a culture of political debate in which bigotry and violence is actively and routinely challenged and fought.

Meanwhile, if the “Labour surge” is to find expression in the industrial labour movement, then we needs unions able and willing to actually win things for their members, in other words unafraid of real disruption and the full extent of our collective power. A labour movement led from the bottom up is the only force that can tip the balance of power in society in favour of the many, not the few. We need to introduce a whole new generation of young people to ideas about class and workers’ struggle, and recruit a whole new generation of workers to trade unions and to the labour movement. Young Labour should lead on training young workers in workplace organising as well as supporting workers in dispute. Young workers’ struggles like the Picturehouse and McDonald’s strikes should be championed. Labour should actively endorse, celebrate and encourage strikes as the positive fact of workers standing up for themselves and fighting back. We need Labour to become much less a party of middle-class professionals, and much more a party of workers, at every level from ward attendance to the PLP. 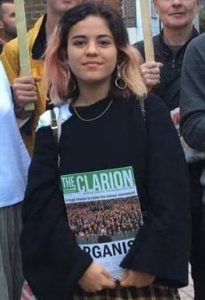 Moreover, we should support workers in struggle even when the employers they’re in conflict with are party members – including Labour councils. We need to develop a strategy for Labour councils and councillors to help lead the fight against austerity, rather than passively implementing the Tories’ cuts.

We need bold, pro-working class policies which can really take on the rich and powerful. At Young Labour Policy Conference this year, we passed policy to bring the banks and their wealth under public ownership and democratic control, and, in line with the main Labour conference, to scrap all anti-trade union laws, restoring our right to picket effectively, strike for political reasons, and in solidarity with other disputes. This must now be actively advocated and campaigned for. We need a much more radical response to irreversible climate change, the biggest threat to our collective future there is, including policies such as nationalising Britain’s Big Six energy companies. We must scrap Trident and instead spend the money on protecting communities by creating alternative jobs with improved wages and conditions, using workers’ skills for social good rather than weapons of mass destruction.

Like many I welcomed Labour’s pledge to scrap tuition fees while knowing full well that it was 7 years of sustained direct action and mobilisation by students and staff since fees were tripled in 2010 that kept free education on the agenda and eventually led to its adoption as a headline policy in the June manifesto. It is the very same organising that will be necessary if we’re to keep the pressure on Labour to maintain and eventually act on its pledges. Young Labour could and must be at the forefront of supporting and building such street movements as well as fighting any and every capitulation to the right, the number and intensity of which will only grow the closer a Corbyn led Labour edges towards government. Few things were as intensely disheartening and sickening as watching Labour sell out on migrants, pit workers against each other and not just fail to defend freedom of movement but outright abandon it. I’m proudly standing on a platform of fighting for a labour movement and party which come out clearly for freedom of movement, migrants’ rights, and against Brexit.

Finally I must be upfront a contributing factor in what eventually convinced me to put aside my instinctive and persistent squeamishness around elections (surprising I know considering the number I’ve found myself in) was looking with increasingly frustration and depression at the selection process for choosing Momentum’s candidate for the NEC Youth Rep. I bet you’re wondering what that process even is and there lies the problem. The only reason I’m at all aware of it is because I sit on Momentum’s National Coordinating Group. This is information that should have been circulated more widely. If the “new politics” is to be meaningful in absolutely any way we need to break decisively from the secretive stitch ups that dominated pre-Corbyn Labour.

My record – as a grassroots activist, as an organiser of two thousands-strong student demonstrations for free education including the one which took place last month demanding the rich be taxed to fund education, as a student union sabbatical officer, as a former member of the NUS National Executive Committee, and as a co founder and former chair of my university Labour Club – is clear. So, as this statement hopefully shows, are my politics. I am a radical socialist, on the left wing of the “Corbyn movement”. I am standing to shake things up – in Young Labour, in the party and in Momentum too.