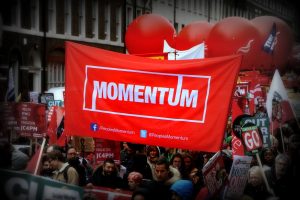 By a Momentum Ealing activist

Activists from Momentum groups from Haringey to Hackney, Newham to North Kensington gathered at the Unite HQ on 2 December for the first pan-London Momentum meeting since the old Momentum London region ceased to function about a year ago. This meeting was so well attended that a larger room than initially booked needed to be found to accommodate attendees.

The meeting heard members’ reports from fifteen London boroughs, with many common themes evident across the region.

Housing
With housing being one of the biggest challenges in London today this was one of the most pressing issues raised by members. Activists voiced their concerns about some current council policies, reported on community campaigns on housing and discussed the potential impact of some councils’ approach to housing at the upcoming local government elections.
Representatives from Haringey updated the meeting on their local councillor selection process and how, contrary to recent reports in the press, the majority of newly selected candidates were not Momentum members but were people from across the party spectrum who were united against the Haringey Development Vehicle.

Party democracy
Discussions around Labour Party democracy mainly focussed on two areas: how to win access to fair and transparent party processes and how to improve processes following election to office within a CLP. Members discussed the need for a robust opposition to bullying and harassment within Momentum branches, Labour Party branches and CLPs, and the importance of reaching out to engage and work with the broader Labour left.
Momentum Ealing brought to the meeting’s attention their campaign calling for a re-run of the local government candidate selection process across London. The basis of the campaign is that many left members were prevented from standing on spurious grounds or were denied voting rights because Local Campaign Forums had set eligibility cut-off dates much earlier than was necessary or reasonable under party rules. Ealing’s experiences were common to many other boroughs. There was broad support for the campaign and for action to highlight concerns about LCF conduct to the Labour Party Democracy Review.

Momentum
Issues relating to national and pan-London Momentum organisation, structure and democracy were also discussed. It is notable that this meeting would not have happened were it not for the initiative shown by Harrow Momentum activists in organising the event.

Conclusions
The meeting was clear in its desire for ongoing London-wide organisation and the development of a support network connecting borough groups. We intend to learn from each other and support each other in campaigning and winning within local Labour parties. To those ends, the meeting agreed to convene a steering committee to help take this project forward.
Immediate priorities for the steering committee include organising a meeting in early 2018 that is focussed on local government issues, policy creation and addressing how Momentum-backed councillors should be held accountable when elected. They will also consider how to promote skill-sharing and training for activists in London.

Finally, the meeting collected funds for the sacked Ritzy/Picturehouse union reps and raised over £100!