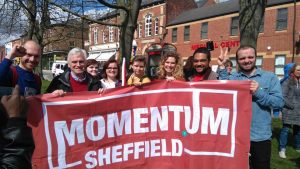 On 29 November, the AGM of Momentum Sheffield passed a motion overturning last year’s position to allow expelled Labour members to take an active part in the group. I’m one of those who has now been disenfranchised, having been the founder of the group’s precursor Sheffield 4 Corbyn in 2015 and playing an active role in Momentum and in Labour’s general election campaign. I was expelled from Labour in November 2016 and am building support to overturn this. (Sign my petition here.)

Ostensibly the motion, which was passed by a small margin, was about aligning with the national Momentum constitution. Fear mongering about being derecognised by Momentum was baseless as other groups continue to include and campaign for expelled Party members. The real reasons were a mix of personal and political.

I am one of two existing Steering Committee officers in the AGM who have been expelled by Labour for political reasons, yet I was reassured individually by three people immediately after they voted through the exclusionary motion at our AGM: “Sorry, Max, but you know this wasn’t about you.” Issues some people have with individuals, in this case with the other person in question, have been addressed by sacrificing all expelled members and alienating many more.

I have significant political and interpersonal differences with this other excluded comrade. I believe there should be formal mechanisms for resolving conflict including, if necessary, disciplinary action within Momentum. But not even informal concerns were raised by those moving the motion beforehand in any constructive way to resolve tensions or differences.

What was particularly upsetting was the triumphalism of the applause after this highly divisive motion had passed. Such rapture didn’t seem like a proportionate response to the stated objective of simply coming in to line with national Momentum policy on membership.

So if it wasn’t simply correcting an administrative irregularity, was it about personality clashes? The fact that the people pushing the motion then took every officer position, suggests not. After the long and emotionally fraught session on motions, the officer elections were rushed through by people behind the exclusionary motion, who quickly nominated for and took every position on the Steering Committee. All of these were unopposed, as those who had previously considered standing had either just been made ineligible or were put off being part of an Executive whose only even implicit political position was that they didn’t want expelled members in the group!

They included people that longstanding members didn’t recognise or had been out of activity with Momentum for a long time. There were no speeches or summaries of political or practical aims for the SC officer roles and, over a week since their elections, we have not had minutes or a written list of the new SC officers to ensure there is clear accountability. Since the AGM, a new code of conduct for the Facebook group has been announced and the other comrade mentioned above has been excluded from that group now too. She is yet to receive any specific reasons for this action.

After this motion, there was another from this faction, saying that Sheffield Momentum should campaign to reinstate Labour members expelled for political reasons. I’m glad of any genuine support and believe there is some goodwill to help, even among some of these individuals, but surely, if you exclude expelled members are you not just giving ground to the right and limiting the conviction with which you campaign for their reinstatement?

I will continue to be involved and work alongside those who excluded me, but we need a far more honest approach in Momentum Sheffield that constructively addresses personal tensions and makes political positions clearer.