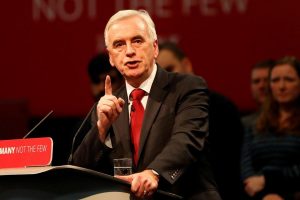 Remember Labour’s 2017 manifesto? Its axis was a pledge to take £50-odd billion by more taxes on the £1,000 billion a year which currently goes to the rich, or to enterprises under their control, and to put those resources into:

• More than £6 billion extra per year for the NHS
• £8 billion extra for social care
• Reversal of school cuts
• Reversal of some benefit cuts, including the bedroom tax and cuts to disability benefits
• Restoring student grants, and scrapping university tuition fees
• Ending the 1% pay freeze for health and education workers.

The manifesto also pledged public ownership of rail, water and mail, and of some parts of the energy industry.

Those same pledges surely should have been the axis of Labour’s response to Philip Hammond’s budget?

“Everyone else just gets on with it, whether it is Japan’s new Robotics Strategy, or the huge support given by the German government to promote the ‘industrial internet’… we are… an outlier amongst the developed nations”, said shadow Chancellor John McDonnell, as he indicted Hammond lack of industrial strategy.

Replacing redistribution as the axis was “a Strategic Investment Board… This Board will bring together, the Chancellor, the Secretary of State for Business, and the Governor of the Bank of England plus representatives from the National Investment Bank and business. It will be charged with delivering a major increase in productive investment across the whole country, focused on technology”.

Candid scrutiny of capitalist policy in Japan or Germany or other countries where governments claim to excel at “strategic investment” – shows that it is producing similar ills to British capitalism’s. Not exactly the same, worse in some ways, not-so-bad in others, but similar.

Compared with Labour’s manifesto for the June general election, this was a different vision. The pledge to tax the rich was dissolved into criticism of the Tories for cutting corporate tax rates, and not sufficiently fixing tax evasion. Public ownership was shoved to the sidelines. The comment from the Economist magazine was sadly apt:

“McDonnell even claimed that big businesses are‘coming to us for reassurance about the long-term future of our economy’… Mr McDonnell likes to emphasise that his preferred policies… are centrist stuff in continental Europe.”