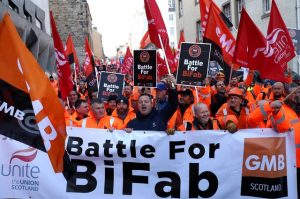 After a dispute historic in both its size and impact, workers at BiFab successfully forced a resolution between their employer and another contractor after the company nearly went into administration.

Workers occupied their yards, undertaking a work-in to deliver the contract and show that their jobs were viable. Although they continued to work under threat of receiving no pay, the workers pledged to maintain control of the yards until a resolution was found, ensuring management could not gain access to remove any equipment.

Scottish First Minister Nicola Sturgeon admitted that if the workers hadn’t taken action then the yards would have closed before a resolution could be found.

There are many important lessons for trade unionists and the left across the UK, and it will serve as a historic reference point.

The excellent support given by union hierarchy should be praised. Embedding organisers into the yards, they were uncompromising in their support for the workers’ demands, at no point were they willing to concede to management or political pressure.

The actions these workers took fundamentally questioned the accepted relationship between capital, the market and the worker; by seizing control of the workplace and forcing a resolution from management they demonstrated and rebalanced power into their hands rather than management.

The community these yards exist in and the historic importance of these jobs cannot be ignored. The areas where the yards are located in are traditional mining communities, where generations have experienced extreme hardship due to the erosion and deindustrialisation of the area after the mines closed under Thatcher.

This context led to the explicitly socialist demands by the workers: demanding the retention of their relatively well paid, high quality jobs. They spoke of the important part they played in contributing to their community, their pride to pay tax and support their families. These working class people could not be further from the super rich who do all they can to avoid their tax.

There will be much to be said and written about the impact on BiFab in the years to come.Their radical action will shape industrial relations for a generation.