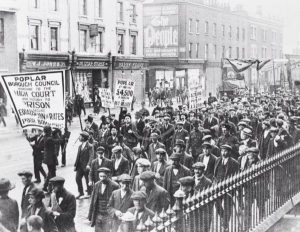 About sixteen years ago, my local Labour council was making cutsto services, attacking its workers’ pay and conditions, and closing my son’s nursery. I and others campaigned against these cuts. I got into an exchange of letters with the Labour whip in th+e pages of the local newspaper.

He argued that Labour councils did not have any choice but to make these cuts as they did not have enough money to keep the services running. I replied that the council did have a choice, but I knew that my argument would be stronger if I could point to an example.I knew that some Labour councils in the 1980s had refused to make cuts for a while, but I also knew that they had all made cuts (or increased charges) in the end. So I rooted around and found out about Poplar Council in 1921.

Swept to power by a newly-enfranchised working class in 1919,the Labour council in the east London borough of Poplar dramatically improved services including housing, libraries, maternity and health services. But when an economic crash drove unemployment upwards, the demand for its services outstripped the financial resources it had to meet them.

The local labour movement held a conference and agreed to defy the unfair local government funding system. Poplar council voted not to collect and pay the precepts to the London County Council, and kept its services running instead.

Thousands marched in support of their resistance, thirty councillors went to prison and Poplar won. A government under the pressure of class mobilisation changed the funding system so that rich boroughs paid more in and poorer boroughs got more out.

I had the example I needed for my argument.

Some people will argue that historical examples are interesting but no longer relevant. But history is there for us to learn from, and we often look even further back than this.

Others will point out that local government finance rules have changed since the Poplar rebellion, today defiant councillors would simply be removed rather than sent to prison. This, though, would surely make it easier for councillors to take a stand against cuts, without their personal freedom at stake. The changes in rules would certainly necessitate a change in tactics, but the basic lesson remains the same: that it is better to defy than to implement cuts.

Still more will say that martyrdom on the part of individual councillors is not the way to win. But the key factor in Poplar’s fight was that it was thoroughly rooted in the local working-class community, democratically steered by the labour movement, with thousands of people mobilised in a variety of events and actions.

I would not advocate a strategy of councillors simply voting against cuts in a political vacuum. Rather, what Poplar teaches us is that a mobilised labour movement, a community actively fighting cuts, in conjunction with councillors refusing to make those cuts, can win.

The alternative is to go ahead with cuts – a strategy that Labour has pursued with varying degrees of enthusiasm in various councils, and which has been one of the main factors in the reduction in working-class support for Labour until recent years, and remains a major obstacle in rebuilding it now. 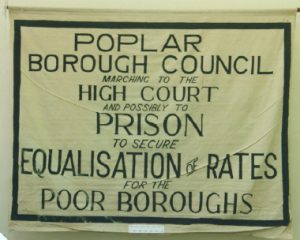