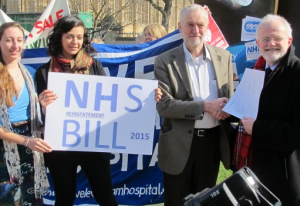 People like Richard Branson are making profit out of other people’s misery and it’s a total indictment of our system. The universal principle of the NHS has been gradually eroded since its inception but MPs, led by Caroline Lucas, have backed a bill that seeks to reverse this and return the NHS to public ownership.

Although delegates to Annual Conference voted unanimously in favour of a motion that called on Labour to back the NHS Reinstatement Bill, the majority of the PLP has not committed to the pledge to back the bill on the website of the ‘We Own It’ campaign: see weownit.org.uk/nhstakeback

It is really important that we lobby our MP to support the bill, which was so decisively supported by the grassroots of the party.

The unanimous support of Conference for the NHS motion has set a precedent for Labour activists to bring motions that call for public ownership of the NHS to their CLPs. Bristol West have done so and here is the motion that is modelled on the one that was passed in Brighton: nhsmotions.weebly.com

Not only does this give a platform for activists to campaign on the issue, as it effectively mandates the CLP to do so, but it raises awareness around the issue and re-enforces the party’s move from the days in which it was privatising the NHS under Blair.

The Tories are currently trying to cut NHS funding to the bone and introduce American style policies under the ruse of acronyms like STP and ACOs. The erosion of the NHS is already having devastating consequences. One day it might not be here.

The fact that life expectancy is dependent on where you were born is abhorrent and all attempts to reduce the universality of NHS provision will entrench this division even further. Socialists must resist this, beginning with suppporting the NHS Reinstatement Bill.