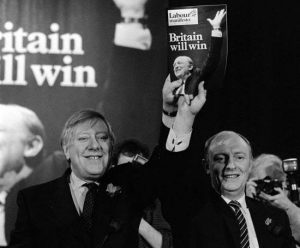 If I were official keeper of the Croslandite flame, easily the most renowned contemporary advocate of that standpoint, I’d be humble enough to ponder why my preferred brand of politics carried such little traction in Britain in 2017.

As a serious partisan of social democracy, I would ask why ideas of the stripe that until recently dominated Labour now fail to enthuse it membership.

Might that indicate shortcomings in the ideas themselves? Or perhaps certain failings on the part of those who now propagate them? Why are adherents so frequently parodied as out-of-touch Centrist Dads or personally venal baby boomer neoliberals?

The very last thing I would do is to dust off memories of the Bennite years, and try to shoehorn developments of the last two years into a prism completely inapplicable nearly four decades later.

That, unfortunately, is what former deputy leader Roy Hattersley unconvincingly attempts in his widely publicised article in the Observer this weekend, which will deeply disappoint those of us whose memories of his past role are better than that.

The piece is little more than a nasty paint-by-numbers hatchet job on Momentum, timed to coincide with the start of voting to fill vacancies on the National Executive Committee, in which three Momentum-backed candidates are standing.

No effort is spared to invoke the atmosphere of Paris in 1793, the Beijing of 1966 or – most alarmingly of all – an inner London Constituency Labour Party general management committee circa 1983, complete with the Millies selling papers outside the building.

Momentum, Hattersley luridly insists, is ‘a party within a party’, which is ‘dedicated to moving Labour to the far left’, and ready to perpetrate ‘subversion’, ‘invasion’ and ‘extremism’ to that end.

‘Corbyn’s revolutionary guard’ are depicted as ‘aggressive newcomers’, who ‘do not believe in parliamentary democracy’. They are ‘intolerant’, and wilfully preparing a ‘bloodbath’ and a ‘purge’.

The level of invective renders rational discussion somewhat difficult. The concrete issues under discussion, remember, are simply local government selection meetings in Muswell Hill, and who gets the white knuckle ride power trip of taking minutes for Wavertree CLP.

The worst that could happen to Claire Kober is that next year she will no longer lead Haringey council. Yet Lord Hattersley inflates the hyperbole to the point where the reader might have visions or her being carted away in a tumbril to be publicly guillotined outside Tottenham Hale Bus Station, on the orders of some putative Momentum-dominated Crouch End Committee of Public Safety.

This is politics. Parties have internal elections and candidate selections. Sometimes newcomers win and sometimes incumbents lose. But what democrat would have things any other way?

The irony is that, while I have never been an adherent of Lord Hattersley’s vision of what Labour should be, I have always accorded him a certain level of respect as one of the Labour left’s more substantial critics.

Lord Hattersley eschewed and even spoke out against the worst Blairite vacuities of the 1990s and 2000s. To his credit, he was never intensely relaxed about people getting filthy rich.
His 1987 book Choose Freedom, although largely a popular restatement of the philosophy of John Rawls, endures as one of the best outlines of social democratic principle within the Labour intellectual tradition.

As a genuine egalitarian, Lord Hattersley should even have welcomed the current leadership’s efforts to reinstate the centrality of equality as a goal for the left, which came close to disappearing in the New Labour era. Indeed, the last manifesto contained much of which his primary inspiration, Anthony Crosland, would have approved.

Instead, he indulges in inane polemic, centred on the widely-touted contention that Momentum is somehow Militant Tendency reincarnate. Even to make that case is seriously to misread the nature of both organisations. Most obviously, Momentum does not espouse revolutionary socialism.

The number of Trotskyists in Momentum cannot make up more than one or two percent of its 30,000-strong membership, and many of them are more likely to badmouth Jon Lansman than bend unflinchingly to his alleged ruthless democratic centralist will to power.

Part of me suspects it would be a good thing if more Momentumites did have stronger grounding in socialist theory, if only because that would make them less prone to promulgating occasional gaffes on social media. Come to think of it, they could do a lot worse than read some of Hattersley’s better work.

The reality remains that today’s mass membership Labour Party is more socially representative than it has been at any point in my lifetime. Far from facing ‘the greatest crisis in its history’, it is now on the cusp of perhaps its greatest ever opportunity.

If we are to seize it, the last thing we need is to do the timewarp again. Forget the tortured analogies, Roy. It isn’t 1980 anymore.