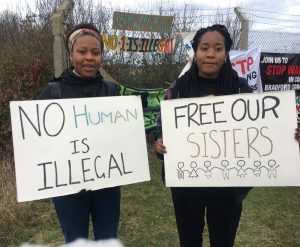 On the 19 November, the 12th demonstration at the Yarl’s Wood women’s detention centre took place. Yarl’s Wood demos have been organised every few months by Movement for Justice (MfJ) to bring attention to the cruelty of immigration detention and the immigration system as a whole. Dozens of groups around the country — including student groups, anti-racist, feminist and LGBT+ organisations, as well as Labour Campaign for Free Movement — mobilised their supporters to demonstrate in solidarity with detainees and all migrants.

The protest was lively and powerful. Attendees heard from a number of former and current detainees (the latter via a phone), and women from inside the centre waved to the crowd through the windows and joined in the chants — which included “no borders, no nations, stop deportations” and “no human is illegal.” However, the turnout was smaller than at other recent Yarl’s Wood demos (around 300, down from nearly 1,000 recently), most likely due to abuse within MfJ which weeks earlier was revealed in a blog by former members of the group. The survivors explicitly requested for Yarl’s Wood demonstrations to continue happening and for grassroots groups to take on organising them.

It is vital for this kind of activism to continue.Thousands of migrants — many of them asylum seekers escaping violence and persecution — are currently kept in detention, not knowing when or if they will be released or deported. UK law imposes no time limit on detention, meaning that some migrants spend even years waiting for a decision. Yarl’s Wood is notorious for documented cases of mistreatment of women detainees as well as appalling standards of physical and mental healthcare. However, the demonstrations go beyond asking for moderate reforms of the migration system: many protesters carry placards demanding free movement of people and denouncing the racism of border controls.

Labour’s 2017 General Election manifesto pledged to introduce a time limit on detention. This would be a big step forward, however, we can and should demand more: an end to the cruel detention system, which imprisons people for no crime other than their nationality, and a radical expansion of migration rights. For this to happen,the left must organise: both in the streets and our communities, protesting detention and resisting deportations, as well as inside the Labour party, through initiatives such as the Labour Campaign for Free Movement. It’s time to shut down detention centres once and for all.