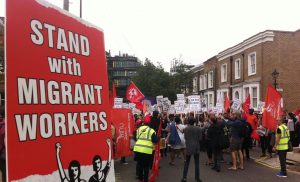 The Clarion is promoting the following model motion from the Labour Campaign for Free Movement. Please let the campaign know if you’ve proposed or your CLP has passed it by emailing info@labourfreemovement.org

On 31 July the Tories confirmed their intention to end free movement between the UK and EU. On 2 August, however, the EU Commission released its Eurobarometer survey, showing 70pc of British people support the right to free movement across Europe. On 4 August the Labour Campaign for Free Movement was launched with the backing of MPs, MEPs, trade union leaders and activists from across our movement, committed to making the argument for defending and extending free movement.

Labour proposes real solutions to the problems facing working people. We need massive public funding to ensure good jobs, homes, services and benefits for all; scrapping of anti-union laws and stronger rights so workers can push up wages and conditions; and communities uniting across divisions to win changes.

Labour is the party of all workers, regardless of where they were born. We note many struggles where migrants have been central to improving low-paid workers’ wages and rights, like the recent victorious cleaners’ campaign at LSE. Our movement must not give an inch to the falsehoods used to turn domestic against migrant workers: we stand for workers’ unity across the divisions of nationality.

Free movement benefits all workers. Without it, only the rich and privileged can live and travel where they want, while migrant workers are more vulnerable to hyper-exploitation, making downward pressure on wages more likely. Limiting free movement further would damage the economy and hit living standards.

This branch/CLP sends our support and endorsement to the Labour Campaign for Free Movement. We will circulate the statement at labourfreemovement.org to our members; urge our conference delegates to support any relevant motions; urge our MP and MEPs to support free movement; and invite a speaker from the campaign to visit our branch/CLP.