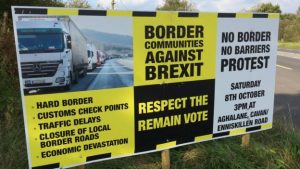 Today’s stuff about borders is big news. Here’s why…

The government wanted to concede that the “real” post-Brexit border will be in the Irish Sea, and now the Scottish government is asking for the same treatment.

The problems ought to be insurmountable. The DUP will never accept a border between the UK and Northern Ireland – and they’ve reiterated that today. Without them, the government falls. Most parts of the political establishment won’t care about the Irish question; what they will care about is the de facto disintegration of the UK.

Put the border in the Irish Sea, lose your majority in the Commons. Put it in Ireland, lose the negotiations with the EU.

Acquiesce to Sturgeon’s demands, and you’ve effectively let the UK fall apart (it would most likely be a hard customs border between Scotland and England; I can’t see how else it would work). But refuse them, and you massively strengthen the SNP’s hand.

The most obvious answer to all of this is to scrap Hard Brexit altogether, and remain in the Single Market with a Norway-style deal. This would appease the Scottish, the Irish and the DUP. But it would destroy May – she would lose her Eurosceptic base and half her Cabinet would probably resign. And they’d have a point: it would be a lot like being in the EU, minus having MEPs.

And then there’s the other option. Ditch appeasing the Brexiteers, say “to hell with it” and hold a referendum on the terms of the deal. May can’t do that – but Labour could.