On the LabourList website, the businessman and restaurateur Ibrahim Dogus has written an article arguing that Corbyn’s Labour Party can be “the natural home for small businessmen and women”. He wants small and medium business owners to set up their own networks in the Labour Party.

Dogus is chair of SME4Labour, a group he set up last year to promote ties between the Party and small and medium enterprises.

If a capitalist wants to appeal to other capitalists to vote for a left-led Labour Party, then few of us will complain. However, socialists should be wary of pitching Labour as a “natural home” of business owners, big or small, or of small-business owners as against bigger ones.

Dogus says that small businesses account for a big section of the economy. Many of their proprietors are fine, upstanding citizens. There is no contradiction between labour movement principles of equality and justice and the desire to run a business.

Many elements of the 2017 General Election manifesto, including a national investment bank and a joined-up industrial and trade strategy, would be beneficial to small businesses.

There’s a kernel of truth to what Dogus says. 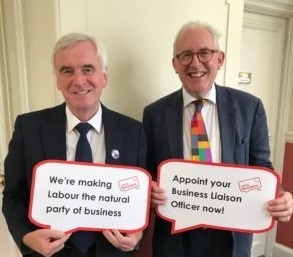 The wage-working class makes up a big majority of the population, but small business people and the self-employed also number in their millions. Many of them are on incomes comparable or worse than those of workers, and would benefit from left-wing policies to provide decent public services. A self-employed plumber needs a decent NHS, clean air, and affordable housing, just as much as a waged-worker.

The labour movement can win the support of many self-employed people and small business owners on that basis and the more the merrier.

But when business people employ other people they become bosses. When that happens, the fundamental dynamic of capitalist society – the exploitative relationship between worker and boss – comes into play. The employer’s interest in a profit margin is set against the workers’ interest in decent and secure wages, limited and predictable work hours, and good conditions.

That isn’t because the boss is necessarily a nasty person. She or he may personally hold enlightened and progressive political views. But the dominant drive for capitalist enterprises is to maximise profit or lose out to the competition.

For every William Morris (who in the 19th century became and remained a dedicated Marxist socialist despite owning a small business), there will be a dozen Anita Roddicks (she had left-wing views on many issues, but her Body Shop chain stated: “The Company does not formally recognise any Trade Union as representing any of our employees, and has no plans to do so”), and hundreds of ordinary profit-makers.

Small business owners, by and large, are more likely to kick up a fuss against such moves than larger capitalist enterprises, since their profit margins and their capacity to respond to workers gaining improvements by cost-cutting technical advances are smaller than those of the multinational giants.

When the moment of divergence comes, a Labour Party that acts as the political wing of the labour movement must side firmly with the workers against their employers, be they big or small.

It’s right for us to appeal to the self-employed and small proprietors on a socialist basis, and to explain that the vast majority of people will be better off in a fair, democratic and socialist society in which the economy is managed rationally for the benefit of all. But at many points a socialist project clashes with small business interests.

Labour should not think that businesspeople can be the bedrock of a movement for socialism. That role falls to the labour movement, and to the working-class majority of society whom it seeks to organise.