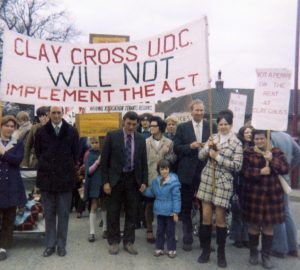 It seems unbelievable today that a rent increase for council tenants of £1 a week could result in 21 councillors being surcharged and banned from office with some bankrupted and having their goods and cars seized for daring to defy a Tory government law, hilariously known as ‘The Fair Rent Act’ or, to give it it’s true title The Housing Finance Act.

Until 1972 local councils had been free to determine their own rent levels. In Clay Cross the Urban District Council were particularly proud of their housing record. Throughout the sixties a programme of slum clearance had seen all the terraced rows and back to back houses with no indoor toilets cleared and replaced with a comprehensive council house building scheme that, had it been emulated nationally, would have seen over a million council houses built every year.

Believing that housing was an essential human necessity the council kept rents low, with subsidies from the rate account, provided elderly persons bungalows with full time 24 hour warden support (councillors were also surcharged for paying those wardens a living wage, against the Tory wages controls).

Where communities were pulled down tenants were rehoused with the same neighbours and the same community. The difference this time was that they were housed in new, high quality houses with gardens, on estates with green spaces and community gardens.

Initially councils up and down the country pledged to fight the Rent Act. Then as implementation time loomed, one by one they fell away. Eventually Clay Cross stood alone.

The Tories were determined the councillors should suffer. In January 1973 the District Auditor ruled the eleven councillors “guilty of negligence and misconduct” and surcharged them ‘jointly and severally’ a total of £6,350. The ‘jointly’ bit meaning that each councillor was liable for the total,therefore taking them over the £2,000 limit that meant automatic disqualification.

Ordinary working people, the councillors had no chance of paying this amount. An appeal was lodged to the High Court: left wing solicitors Seiffert Sedley handled the appeal pro bono; Lord (Tony) Gifford was the barrister. To add insult to injury, when the appeal was lost the district auditor was awarded a further £2,000 costs.

In summing up the ruling Lord Denning, declared “They are disqualified. They must stand down…I trust there are good men in Clay Cross ready to take over”.

Clay Cross Labour took him at his word, although good women were also included, a ‘second eleven’ were selected and ten of them elected to replace their surcharged comrades. The first decision was to continue the policies of their predecessors. They were eventually surcharged a total of £2,229, just enough to ensure their disqualification, for maintaining the fair wages policy.

The government had, in the meantime, sent in a housing commissioner to collect the rents. Patrick Skillington was a retired civil servant from Henley on Thames, a place presumably much like Clay Cross. His opening press conference was disrupted and he fled after just ten minutes.

He was denied an office in the council premises and had to work from the Chesterfield Hotel some six miles away. A policy of non co-operation with him was maintained by both sets of councillors. Tenants were asked to only pay the rent as set by the council. When he left, upon local government reorganisation in 1974 he had never collected a single penny of the rent increase.

Unlike the councillors he was not surcharged and in fact was given a stipend of several thousand pounds for his ‘expenses’. 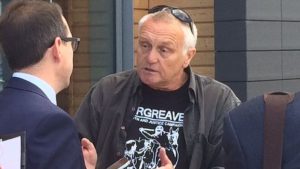 Today’s situation,with Labour councils implementing Tory austerity, makes this last point all the more relevant. The cry from them is “if we don’t do it the government will send commissioners in and it will be much worse!” Of course we know Labour cuts are nicer than Tory ones!

The answer should be let them! If a tiny town in North Derbyshire could stand and fight whilst single handedly seeing off a commissioner, just imagine what a major city could do, or loads of councils standing firm.The cuts would be halted in their tracks.

Tragically the Labour government of 1974-79 refused to lift the surcharges, the original eleven bankrupted faced incredible hardships, unable to obtain credit, losing possessions to bailiffs. One, George Goodfellow, had had a holiday booked before the Housing Finance act became law. The travel firm went bust. Some time later he eventually got his money back, it was seized by the receiver.

Several lost their cars, but, in an act of supreme generosity, their spouses were given first choice to buy them back

The second team of councilors were saved from bankruptcy by a fund of donations from the labour movement, but remained barred from office.

In 1974, under local government reorganisation, Clay Cross UDC was abolished and became part of the North East Derbyshire District Council. It was led by a certain Bob Cochrane.

He could not wait to collect the increase in rent, even setting a higher differential rate on Clay Cross to collect a ‘deficit’. He went on to form the Social Democratic Alliance and split the Labour vote in 1983.

So 21 councillors kept a Tory government at bay for two years but their achievements were far more than that. When Thatcher took away free school milk they increased the chairman’s allowance from £25 a year, spent on an armistice day wreath. As a means of reinstating free school milk this was increased to £300, the £275 difference being just enough to legally provide for all Clay Cross schoolchildren. Free TV licences for all OAPs were also introduced. Their council house streets were named after prominent labour movement politicians – Bevan Road, Brockway Close, Pankhurst Place. Later there even became a sheltered housing scheme with live in wardens called Marx Court!

Later in 1984 councillors from Clay Cross on North East Derbyshire District Council, fought for, and won, free use at all leisure centres for striking miners. Clay Cross Social Centre became a soup kitchen for strikers with free meals every day and was used for fund raising events.

I am proud to have been part of that struggle and, at the tender age of 22, becoming the youngest councillor ever to be surcharged. I would do it all over again. In the words of George Lansbury and the Poplar councillors, Better to break the law than break the poor!

• John Dunn was a surcharged Clay Cross councillor and after that a striking miner throughout the 1984-5 strike. In 2016 he confronted and challenged Owen Smith when the latter used Orgreave, site of huge clashes between the miners and the police during the strike, for his campaign launch – and was suspended from the party as a result, before outcry led to him being reinstated.