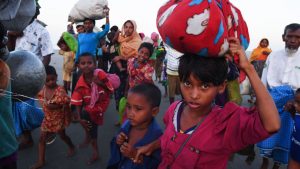 In September, Jeremy Corbyn called on Aung San Suu Kyi to “make sure” that the Rohingya people in Myanmar “have full citizenship rights and that they are not driven from their homes and their land”, reminding her of the solidarity shown when she herself was under house arrest by the military.

More recently, at the end of November, the Labour-controlled Oxford City Council voted unanimously to strip Suu Kyi of her Freedom of Oxford Award, stating it will not celebrate “those who turn a blind eye to violence”. These are starting points for an urgently needed solidarity campaign by the entirety of the British labour movement for the Rohingya people.

Described by the Economist as “the most persecuted people on earth”, the Rohingya people in Myanmar have faced ethnic cleansing by Myanmar’s military, leading around 700,000 Rohingya people to be driven from their homes into refugee camps in Bangladesh.Myanmar’s security forces have burned homes and UN investigators report that the death toll of the euphemistically termed “clearance operation”’ may be “extremely high”.

The recent crisis is set in the context of decades of oppression, from 1982 onwards, Rohingya people were deprived of access to full citizenship, rendering them effectively stateless. In Myanmar, the Rohingya are not an officially recognised ethnic group, and the state refers to them as Bengali (arguing they have an illegal immigrant status).They must seek permission to marry and are prohibited from having more than two children.

Whilst refugee camps are struggling to provide a litre of water a day to each person, Myanmar’s government, led by Aung San Suu Kyi, declares to international observers that no ethnic cleansing is occurring in Myanmar. Reluctant to alienate the Buddhist majority in the country, many of whom are influenced by Buddhist nationalist groups and resent Muslim minorities, and reluctant to place any strain on the power-sharing agreement between the civilian government and the military, the civilian government has entirely turned its back on the Rohingya people and enables their persecution.

The economic deprivation in Rakhine, the poorest state of Myanmar, has certainly exacerbated hostility and resentment to Rohingya Muslims by Buddhists, many of whom are of an ethnic minority themselves.The persecution is promoted and legitimised by Buddhist nationalists.

Monks who are part of supremacist groups like Ma Ba Tha or 969 argue that the country, which is 89% Buddhist, must be protected from “Islamization”. The weekly paper of the Ma Ba Tha carries headlines such as “The Different Dangers of Bengali Muslims” and features the extremist monk Ashin Wirathu who has previously stated that it is better to marry a dog than a Muslim. What this highlights is that Buddhism is no more immune to the poison of oppression and persecution than any other institutional religion, far from its image in the West as more peaceable.

What is clear is that as a labour movement must make clear solidarity with the Rohingya Muslims. The Tories look the other way or, in Bob Blackman MP’s case, host Tapan Ghosh in Parliament — a Hindu nationalist who has praised the Rohingya genocide. We must push back against this. In Rosa Luxemburg’s words, “there is no socialism without international proletarian solidarity” and it is our moral duty as a movement to stand against genocide and persecution everywhere. There is no oppression that is nothing to do with us.

Whilst the international ruling class make it their business to build links with Myanmar’s military and sell them arms (the UK government only suspended training in September this year and has spent over £300,000 in training them previously), our task is to fight for the rights and dignity of our brothers and sisters across the globe.

We should firstly be passing motions in our local Constituency Labour Parties, urging the Labour Party as a whole to follow Corbyn’s lead and raise the issue forcefully and forthrightly in Parliament.

Moreover we should be building links with campaigners for the Rohingya Muslims in the UK and elsewhere to co-ordinate solidarity actions in order to provide practical support for Rohingya people left in refugee camps, with neither basic necessities nor rights.

A party that languishes in apathy as we hear of our siblings suffering lacks in any vitality or moral fortitude.The limits of our party’s honour are defined only by how far our solidarity extends. That is why we must energetically take up the cause of the Rohingya people.