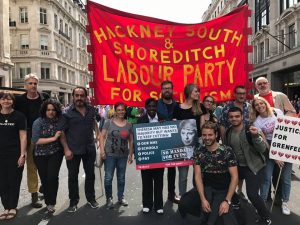 Last June, two weeks after the seismic General Election, I was elected secretary of Hackney South and Shoreditch Labour Party at a 240-strong meeting which saw our grassroots left slate win nearly all positions on the executive. Having spent 18 months building towards this – learning how meetings work, engaging new members, encouraging people to stand, and so on – we had to change gear and actually run things.

It’s clear that those Labour Party members who argued that Corbyn was unelectable and were still predicting a Tory landslide on the day of the election, don’t understand the current political climate. This includes many Labour Party staff who worked incredibly hard during the campaign but whose flawed assumptions led them to send money and people to seats that many of us could see were safe. When we knocked on doors we were directed away from people who’d voted Tory in the past assuming that the best we could hope for was to shore up the Labour vote and missing how many Tory voters were open to persuasion. If we’re to win next time and to deliver on our manifesto, it’s crucial that people who understand our political moment take a more active role in shaping the party. But what does it mean to be a Corbynista CLP secretary?

Over 200 CLP secretaries are members of an active online forum. I think this is the least partisan online Labour Party space. For example, instead of discussing who to support in the NEC elections, we shared candidate statements, debated methods for nominating and complained about the tight deadline. This underlines that wherever you are politically, your priorities as secretary are processes and administration. I’m strongly associated with Momentum locally which means some see me as divisive. One person explaining why he didn’t vote for me said “You’re a really good organiser but…” After two years of feeling that the rules are being used against us, it’s really important to me that I not only am fair but that I’m seen to be fair. I quit the Momentum Hackney steering committee after being elected. I didn’t have time for both roles and I hoped this would be taken as a sign of my commitment to impartiality. I’m studiously neutral in how I respond to policy motions, following consistent procedures whatever my personal views. And in contrast to past practice, I never pass on information to anyone before I pass it onto the whole membership.

But if politics don’t matter, why stand? Why spend time preparing agendas and minutes, answering endless emails and sorting out the database when you could be campaigning on doorsteps and at demos? The answer is symbolic and practical. To continue to have local parties run by people who have actively opposed Corbyn in defiance of the vast majority of the membership creates tension. Supporters of the ‘new politics’ are more likely to engage with the Labour Party if they see their politics reflected back to them in their CLP’s leadership. More fundamentally, I believe that some long-term members’ suspicions of new members meant that they didn’t try to engage them. Why else had our CLP not had its own new-members event in two years despite more than trebling in size during that time? We need to engage people so that we can use the skills and energies of our huge membership – around 3,300 in Hackney South alone – to build our movement.

Through my work in Momentum, I’ve learned about what motivates new members and where they get stuck. I include more explanations in my emails and use a powerpoint presentation to guide people through business meetings. We’ve produced a guide for branch secretaries and matched new chairs and secretaries with people with experience of those roles. We’ve also started a Facebook page so the party is more outward facing and are about to launch a series of four videos describing how the local party works. So administration is not neutral. It can include and it can exclude.

Corbyn stood on a platform of promoting democracy within the Labour Party and across society. Central to this is for local Labour parties to play an active role in national and regional party structures. As the first point of contact, the secretary is key to making this happen by engaging creatively with Labour Party instructions. This year Hackney South sent motions to both our national and regional conferences for the first time in ages. Motions may be a terrible way to debate issues but – at least until the democracy review reports – they’re our main route for grassroots input into policy. I offer to support people in putting together motions and I always report back on what’s happened to those we pass so people feel they’re part of a process.

More broadly, as a member of the executive, I can play my part with the other officers in shaping the direction of Hackney South Labour. Last January, we passed a motion of solidarity with the Picturehouse workers’ struggle for a living wage, trade union recognition and improved conditions. Until June this led to nothing more than a collection after a meeting. Under the new executive, we’ve offered more active support, organising community pickets of Hackney Picturehouse and holding a poetry and comedy fundraiser in a local bar that brought in more than £500 for the strike fund. We’ve done this alongside a full programme of Labour Party campaigning and fundraising. It is this combination of electoral and movement politics that saw Jeremy win the leadership and that I believe will see him elected Prime Minister. As Naomi Klein said, through this “we can create a force that is both stronger and more nimble than anything either parties or movements can pull off on their own”.  If we’re serious about winning, we need this shift of power at CLP level to continue.