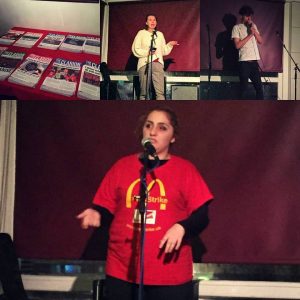 On 23 November The Clarion held a packed event at the Bread and Roses pub, owned by Battersea and Wandsworth Trades Council, in south London to celebrate our first year. With comedy from Gruffudd Jones, music from Sparkling Duet and DJing from Alex Booth, we raised money for the Picturehouse and McDonald’s strike funds – £230 in total. We also had speeches from McStriker Shen Batmaz, Monty Shield of the student group NCAFC, Ritzy Picturehouse rep Agata Adamowicz and our editor Sacha Ismail. The evening was compered by our editor Rida Vaquas.

Below is the text of Sacha’s speech, explaining what The Clarion is all about.

Thank you for coming. I’m going to say a little about what The Clarion magazine, whose first anniversary we are celebrating tonight, is and stands for.

We started in September 2016, with our first issue produced for Labour Party conference. Since then more people have become involved and our editorial board has expanded. In total we have published ten issues, plus a special for this year’s conference, and issue 11 will be out at the start of December.

I think the Clarion project is making at least three distinctive contributions:

The first is to help revive a culture of producing and circulating literature and publications on the Labour left, which has largely fallen into dormancy. Since our first issue there has been a bit of flurry of blogs and websites oriented to the Corbyn movement, but little physically published. We have a regularly updated and well-read blog, but we pride ourselves on producing a magazine that can be sold at meetings and demonstrations, a visible physical presence, which collects together articles but is more than just a collection of articles. It is a forum for reporting on what is going on across the movement but also for developing, promoting and debating ideas.

Secondly, we have distinctive political message. Our mission statement is broad and those who edit and contribute to the magazine have significant differences on various things, but we unite around a socialist politics that is definitely anti-capitalist, which is based on workers’ struggles, which is internationalist and pro-migrant, which takes oppression seriously and which puts a premium on democratising and transforming as well as building up our movement. These things should be a given on the left, but they’re not, yet. We’re part of the Corbyn movement, but we also want to challenge and change and improve its politics to make them adequate to the tasks it faces. All that shapes our coverage – our focus on workers’ struggles, on standing up proudly for migrants’ rights and free movement, on democracy in Labour and the left, and on demands which are not yet popular but which should be, like nationalising the banks or councils actually leading a fight against cuts.

Last but not least, we do not just comment. We organise, inside Labour, outside to support workers’ and other struggles, and to build links between the two. This year’s Labour Party conference passed a motion for repeal of all anti-union laws, for a strong right to strike and in support of the Picturehouse and McDonald’s workers. It was us who put together that motion and organised activists in CLPs to get it submitted and got it passed. You can read about it on our current front page. Our work is not just about getting people in positions of influence, but about organising and building at the grassroots – whether that’s making proposals in CLPs or setting up local Young Labour groups or getting Labour members down to picket lines.

We’re looking forward to doing more over the next year. If you like the sound of what I’ve said, then we’d urge you to get involved – whether that’s just by buying or subscribing to the magazine, or writing for it, or taking copies to sell, or getting one of us to come and speak to your Labour branch or other organisation.

We are at a turning point, where the left clearly has big opportunities but also faces serious challenges – in reviving trade unions, for instance. We publish The Clarion because we believe a clear, bold voice for socialist politics in the Labour Party will be essential to taking the opportunities and meeting the challenges. The more people involved the bigger difference we can make to change our movement and change society.