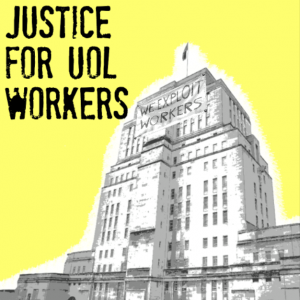 On November 21, workers at University of London went on strike for in-house contracts, secure hours, and pay raises. Their strike was met with a larger protest outside of the historic Senate House of students and community supporters on the day of a visit by Princess Anne, the university’s chancellor. This is an ongoing dispute being pushed forward by the main union at Senate House, Independent Workers of Great Britain.

Large numbers of the security guards, receptionists, post workers, cleaners, and porters involved in this campaign are migrant and/or BME workers, who are less likely to have secure hours and contracts at UoL, as in many workplaces. This has lead the IWGB and other campaigners to call the particularly exploitative treatment of these workers a product of systemic racism and xenophobia. This demographic of low-paid migrant workers is many times ignored by the wider labour movement; however, there are growing campaigns from United Voices of the World, the IWGB and some sections of more mainstream unions that are fighting for the rights of precarious migrant workers. In recent months, outsourced workers at LSE and SOAS won their campaign to come back in house, proving that migrant workers can and will win industrial disputes.

A similarity running through all these campaigns is the heavy involvement from community supporters, particularly students. Students from various University of London institutions have come together to create the Justice for University of London Workers campaign, which has already started taking action at Senate House.

No doubt the workers involved in this dispute would benefit under a left-wing Labour government, but they don’t have time to wait for Corbyn to be elected. We need more strikes and more campaigns that fight militantly for the demands of the Labour manifesto and go far beyond it. This is how we are going to get the kind of pro-migrant, fighting Labour Party and government that we want.