By Raquel Palmeira and Kate Harris

On 7 November Hornsey and Wood Green’s young members met to constitute a Young Labour group including electing a committee. The previous month we met to decide how to set this up, the roles we would create and what our campaigning would broadly focus on.

We decided to campaign around low-paid and precarious work. This work disproportionately affects younger people and migrants, with the National Living Wage (i.e. minimum wage) only fully applying to people aged 25 and above.

Migrant workers and young workers tend to be very exploited at work due to employers taking advantage of insecure conditions and even worse labour laws. In addition to young workers being paid less for doing the exact same work as workers aged 25 and above: under-18s can be paid as little as £4.05 per hour. 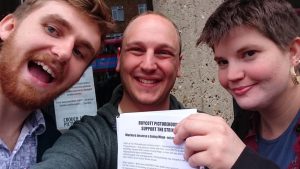 We know that a lot of young people need housing just as much those aged 25+ and that working class young people may not be able to rely on their family to house them. It is essential that we end age discrimination at work. A £10 minimum wage for all would do a lot to prevent homelessness and poverty.

We also know that we can help to organise young people at work. The Picturehouse and McDonald’s strikes have shown us that young people, including migrants, can organise and fight back! If we spread strikes and build solidarity we can take the fight to the bosses.

Given that Crouch End Picturehouse is in our constituency we are planning solidarity actions to strengthen the community boycott of the cinema and embolden the workers. There are lots of fast food outlets in Wood Green where we can talk to workers about the Bakers’ Union’s Hungry for Justice campaign and encourage unionisation. Some of our members work in service industries and we plan to educate ourselves on organising our own workplaces.

Young members in Hornsey and Wood Green should keep an eye out for their emails to find out more. Our next meeting is on Monday 4th December. We have a Facebook group which young Labour members in the constituency can join too – see here.