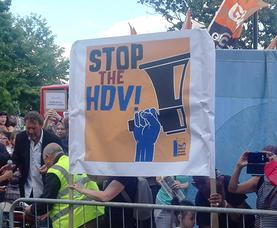 By a Haringey Labour activist

What is going on in Haringey? An “aggressive purge” of “centrist councillors” screamed the front page Murdoch’s Times, carried out by what the Daily Express told its readers are “extreme hard-left members of the Labour Party.” Labour First supremo Luke Akehurst has even called for the NEC to “suspend the selections and impose all the candidates.”

What is really going on is much more straightforward: labour movement democracy, asserting itself against the arrogance of those in the leadership of Haringey Council.

Over the last year, widespread opposition to the Council’s £2bn privatisation and “regeneration” programme, the Haringey Development Vehicle (HDV), has been growing. A grassroots campaign, StopHDV, has brought together Labour members, members of other left organisations, local residents, community campaigners and trade unionists.

Bit by bit, the campaign has exposed the potential risks of Haringey Council’s proposed joint venture with the multinational developer Lendlease – a policy not even mentioned in the 2014 local government manifesto – cutting through the spin and doublespeak of Cabinet members and the Council’s PR operation.

Fight on all fronts, with meetings with affected residents, deputations to the council, mass demonstrations, motions in local Labour Party branches and CLPs, and a legal challenge through the High Court, the campaign has made the HDV a key dividing line in the Haringey labour movement.

In the face of this opposition, the Council leadership has ignored the voices of Labour members in both Tottenham and Hornsey & Wood Green CLPs, the two local MPs David Lammy and Catherine West, and local trade unions. When, at Labour Party conference, Jeremy Corbyn gave his support for balloting residents in estates affected by regeneration projects, Haringey Council came out the next day to publicly defy national party policy.

Such contempt for the views of the local party was always going to have consequences. Now, with the candidate selections for the 2018 local government elections, party members finally have had an opportunity to make their views heard, and select candidates who will uphold democratically-agreed policy. They are seizing the opportunity with both hands.

Yes, the Labour and wider left in Haringey is well-organised. At branch level and CLP level, members of a Grassroots Left alliance, including but by no means limited to Momentum members, swept the board at Hornsey and Wood Green CLP in the recent AGM. Tottenham CLP, too, has for several years been a left-led local party. Yes, Momentum and Jeremy for Leader data is useful for organising.

But none of this explains the sheer scale of what has happened in the Haringey selections. At branch selection meetings, sometimes attended by well over 100 people, members have come out on cold November evenings to take part, and the results have been clear.

At the time of writing, 35 candidates opposing the HDV have been selected, against only 7 who support it. Those who have resigned or been de-selected include five cabinet members, including cabinet member for Housing and Regeneration Alan Strickland, and the council chief whip. Whatever happens next, there will be a majority of anti-HDV candidates selected.

This mass engagement of party members has unnerved many on the Labour right. Rather than admit they lost the political argument, they have instead put forward the conspiratorial narrative of a “purge”, now being gleefully echoed by the Tory press.

In his graceless resignation letter, for example, Alan Strickland, who failed to get the majority in the Noel Park short-listing meeting necessary to secure automatic re-selection, blamed the “sectarian atmosphere” and “a majority of members at the meeting simply following the written instructions given out in advance by factional activists”, rather than the widespread unpopularity of the HDV, for which he is in part personally responsible. Few who attended the Noel Park meeting, which was open and well-conducted, will recognise Strickland’s portrayal.

The strong implication from those councillors, like Strickland and Stroud Green’s Tim Gallagher, who resigned before facing their selection meetings, is that they have a Divine Right to be Labour councillors; that they deserve to be re-selected without having a trigger ballot and without answering questions from ward members.

Moreover, complaints about “factional activists” and the leafleting of meetings suggest a view of Labour Party members as unthinking drones, easily manipulated and willing to blindly follow instructions.

The opposite is true. The Labour Party in Haringey made its views on the HDV very clear; it gave the Council leadership ever opportunity to pause and reconsider. After months of not being listened to, now, finally, Labour Party members are having their say.

However, despite losing all political support for the HDV, it is possible that Kober and her allies may try to push it through. The Blairite “zombie council” must not be allowed, between now and the local elections, to go ahead with their plans. The local labour movement should use every means at its disposal to disrupt, frustrate and ultimately stop this disastrous social cleansing scheme.