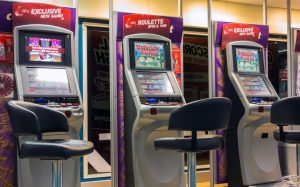 On 31st October, the government released a long-awaited report into fixed-odds betting terminals (FOBTs), on which gamblers can play casino-style games, ahead of a 12-week consultation period. When the this period ends in January 2018, the government will come to a decision about reducing the maximum bet on machines per spin from £100. The Labour Party and gambling reform activists advocate a £2 cap for FOBTs, but under the Conservatives it could remain obscenely high at £20, £30, or even £50 per spin. It is time for some Labour grassroots pressure to force the government to go for the £2 option. That’s why the Labour Campaign for Gambling Reform – or LCGR – has been established.

FOBTs have been dubbed the “crack cocaine of gambling”. They blight the lives of some of the most vulnerable people in our society. It is about class – betting shops have cynically clustered in deprived areas, afflicting communities that already face issues with poverty. Of the 62 constituencies where gamblers lost more than £5m in 2015-16, 47 are held by the Labour. It is up to Labour to stand up for these communities and against the scourge of these addictive machines.

It is also about race. Bookies have deliberately targeted areas of high ethnic diversity with harmful FOBTs. Paddy Power is the worst offender, with 61% of their shops located in areas with above average numbers of people born outside of the UK.

Then there is mental health. A recent paper by the Money and Mental Health Policy Institute says that “problem gambling is associated with a wide range of psychological symptoms of mental health conditions such as increased anxiety, low mood and poor coping skills.” A person with mental health issues who becomes a problem gambler will compound existing issues, and FOBTs are the most addictive machines out there. Class, race, mental health – are there three more crucial issues for the Labour Left? The need for the LCGR couldn’t be clearer.

It’s more than just FOBTs though, and Labour needs to look at how else it can reform gambling for the many. One of the great mistakes of the last Labour government was the Gambling Act of 2005. While there were some new regulations, in some respects the 2005 Act liberalised gambling.  The next Labour government will not repeat such mistakes, and the LCGR is all about highlighting these issues and informing the debate about policy so that at-risk people are protected.

Labour members are already making their voices heard. In Barnet, local activists, councillors and assembly member Andrew Dismore were a part of a successful campaign to stop planning permission for a new betting shop. Campaigning works! Now we need to follow their example and stand up to predatory bookies – starting off with FOBTs, their worst weapon.

The LCGR’s website is currently under construction, but you can find out more about the group via Twitter and Facebook. There, you will be able to find out about our launch event on 6th December with Carolyn Harris MP, Jo Stevens MP and Jeremy Corbyn’s former spokesperson, Matt Zarb-Cousin – all of whom have done excellent work to expose the damage FOBTs do. The event is also backed by Red Labour.