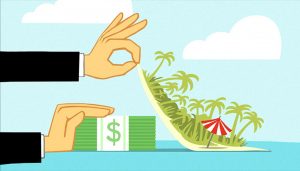 A huge amount has been written, in the mainstream and on the left, about the spotlight the “Paradise Papers” episode has shone on the pathologically anti-social behaviour of the rich in today’s capitalist world.

The Clarion would argue for the labour movement and left to draw the following lessons.

Still think there’s no magic money tree? The left has attacked the Tories for using the claim that “there is no magic money tree” to justify austerity. But in fact John McDonnell said exactly the same thing to the 2016 Labour Party conference: “There are no easy options. There is no proverbial magic money there”. Nor was this just a throwaway or isolated remark: the Labour leadership has been remarkably reluctant about spending commitments, not even saying, for instance, that it will restore the money taken from local government since 2010 or that it will provide funding to get council house-building started. We need to insist on what has now been proved, again, beyond all doubt: there is a vast amount of wealth in society but it is in the wrong hands. A left government should minimally attack that wealth to reverse all cuts and social degradation since the crisis hit and begin to improve things. Opposing tax cuts and tackling tax avoidance is not enough, not even as an immediate approach.

Expropriate the banks! Banks and high finance are central to the economy’s functioning, and their hunger for profit has been central to the economic chaos of the last decade, licensing of rich people’s greed and growth of inequality. Nor can the hoarding of wealthy by the super-rich be tackled without taking over and repurposing these engines of inequality to serve public needs. Labour should fight for the policy successfully proposed by the FBU to the 2012 TUC Congress but never implemented, and more recently endorsed by Young Labour Policy conference: a publicly owned and democratically run banking and financial system.

We need to talk about the monarchy. It’s good that John McDonnell called for the Queen to open up her financial records in the wake of the Paradise leaks. But it should be abundantly clear that the monarchy is an institution of the class enemy and one that needs to be exposed so it can be scrapped. This is not a politically straightforward issue to raise and it is understandable why the leadership is so keen to avoid it. And yet…

Fight for socialism. We need to use this opportunity to step up the fight to radicalise Labour’s program, and in particular its commitment to public ownership. The questions we need to ask are whether existing commitments (around water, Royal Mail, the railways and so on) will be carried out; about ways in which, even as immediate demands, they do not go far enough (the banks and the energy system spring to mind); and what it means for something to be in “public ownership”, in terms of by whom, how and for what goals it is run. Beyond that we need to revive the idea of a radically different society from capitalism, a socialist society based on common ownership of the great concentrations of wealth production, in which scandals like those revealed in the Paradise Papers are impossible because the economy and politics are democratised in order to plan rationally and meet human need.