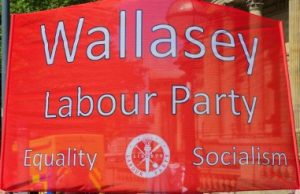 We were sent this report by activists in Wallasey.

By a Wallasey spokesperson

Wallasey CLP has been suspended for 15 months. The CLP AGM in June 2016 backed Jeremy Corbyn as the attempted coup by the right wing of the Parliamentary Labour Party was unfolding. Wallasey MP Angela Eagle then put herself forward as the challenger to Jeremy. Accusations of homophobia were made, allowing Labour’s HQ to close the CLP down.

This prevented the CLP from nominating Jeremy, which would have further undermined Angela’s challenge. All allegations collapsed months ago. No one in the CLP is now accused by Labour of homophobia or any other unacceptable behaviour at the 2016 AGM.

“We are delighted that Wallasey Labour Party is now back up and running and that we have been re-elected as Chair and Secretary. We look forward to working with our MP and our local Councillors for a socialist Labour Government with Jeremy Corbyn as Prime Minister, and a socialist Labour Council that defends our community against cuts and privatisation.”

The CLP now needs to move forward and campaign on the many issues that affect our community. But there are lessons to be learned, and some steps to be taken, to help that happen. The CLP Vice Chair Paul Davies was suspended from Party membership months ago. There is still no date for a hearing, and so he was unable to stand for office this year.

Paul was prominent in defending the CLP in the media, and is unjustly accused of “bullying” – for inviting two Party members to accompany him to a lie detector test. Labour’s definition of “bullying” includes “gossip, spreading malicious rumours and slander”. Yet no action has been taken against the Party members alleged to have made up the stories about homophobia at the 2016 AGM and peddled them in the media.

To help the CLP move forward, it is vital that the charges against Paul are dropped.

A radical reform of Labour’s disciplinary and administrative processes is needed. We believe the suspension of the CLP was a political act, to prevent the CLP from further undermining Angela Eagle’s challenge to Jeremy.

Wallasey Labour Left activists are grateful for the support that Jeremy Corbyn and some other left wing NEC members has given them over the last 16 months. But others on the NEC voted to continue the suspension even after the facts became clear, and voted for disciplinary action against Paul.

The current NEC must defend democracy in the Party. Labour should now readmit the many left-wingers excluded for being the “wrong kind of socialist”, or for their previous activity in the Green Party or left wing groups outside the party. Just over the Mersey in Liverpool Riverside socialists have faced false accusations for criticising the Israeli government. Labour must defend free speech on Israel and the right to call for protest and peaceful direct action in support of the Palestinian people.

The Labour left in Wallasey are grateful to The Clarion for the support given over this difficult 15 months.

Together we can transform Labour into a campaigning socialist party and bring about real change in the lives of those we represent.