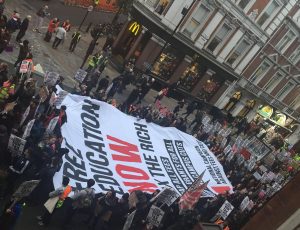 On 15 November, thousands of students demonstrated in London under the slogan “Free education – tax the rich”, on a protest organised by the National Campaign Against Fees and Cuts. We publish here three speeches given at the rally at the end of the march. 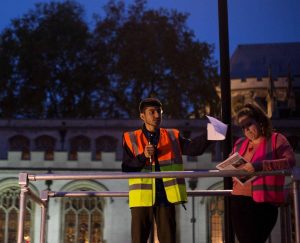 My name’s Hasan, I’m 14 and I’m here today because I’m angry. I’m angry because my school is so underfunded that my own teacher has to spend her own money on basic equipment. I’m losing my books, my pens, and most importantly my teachers. I’m being squeezed by a system that wants to train us for exams, not to question why society is run by the few, for the few.

Like so many others, when I leave school, I have a choice. £50,000 of debt at university, or a life of poverty wages. The way things are going, I’ll probably get both.

Austerity is all I’ve known: I was 7 when the Tories got into power. 7 year olds didn’t cause the economic crisis, but they shut my youth centre anyway. By 2020, my school will have had £400,000 of cuts and lost 8 teachers. Is this what we want?

It’s not hard to see that this government is launching an all-out attack on education in this country. It’s the same government attacking higher education that is cutting my school’s funding.

I’m young, not stupid. I know that this is bullshit.

I’m not involved in this campaign just because I’m angry. I am also inspired. I got involved in politics because I was inspired at the radical alternative that Jeremy Corbyn is offering us. And I’m inspired by the thousands of people in front of me right now!

We’re all here to fight for everyone’s right to properly funded, free and democratically run education. A National Education Service, with no private schools, no academies and no debt!

That’s why I’ve spent the past 2 months mobilising for this demonstration – leafleting, speaking to my classmates, and going round local colleges spreading the word.

It will be four years until I’m old enough to vote Labour in a general election. We can’t wait that long.

In Lewisham, mass walkouts by secondary school students defeated plans to turn three schools into academies. We’re winning the argument for abolishing tuition fees. Rent strikes are starting up and down the country.

We’re not here to win small changes – a bit more funding here, slightly lower fees there. We want it all. Only if we link up our campaigns into a national movement can we win a National Education Service, from the cradle, to the grave. The time to organise is now, whether in Young Labour, on your campus or in your community. Let’s win the education system we deserve.

“Fucking yes, we should be entitled!” 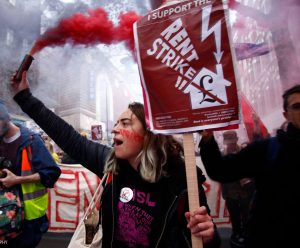 As we have heard from previous speakers and as we will hear from speakers later the free education movement is not just about the abolition of tuition fees.

We have not marched for hours on a cold november day to demand a set of reforms to be gradually implemented over the next five years. We don’t want to reform the education system, we want to radically transform it. We are here because we want concrete, meaningful change that will improve the lives of everyone for the better.

Now I’m gonna talk about something very close to my heart. So you know when the month is rolling to a close, you’ve just finished a 10 hour shift at your minimum wage hospitality job, you’ve still not finished that coursework, your mental health is shit, but there’s nothing you can do about that– waiting lists are too long. And suddenly there it is.

Rent is due. Again. You’re paying extortionate amounts to live in a crap house, in a crap area with crap appliances. And you know what? There’s someone making a living from ripping you off.

And you know what? They’re the people who run our universities, the people who decide everything about our university life. And you know what? We’ve had e-fucking-nough of it, and what’s more is we’re winning. UCL cut the rent won £1.2 million pounds in rent subsidies. Our Vice Provost didn’t want to address high rents, he wanted to keep increasing rents year on year to fund million pound vanity projects, but we said no. Actually it was you that said no! Students said no, they took action. If it’s possible at UCL it’s possible anywhere, and I’m telling you it’s happening all over the country, right now.

Rent is everyone’s problem: so I doubt I only speak for myself when we say our lives are being crushed under its dead weight. The demand for rent is a major source of financial pressure; a key factor in sustaining poverty and the main expense for students and non-students alike. No one ever hears of landlords lowering rents themselves, but everyone has heard of the damp, dilapidated and overcrowded homes that form the bitter reality of the housing crisis.

We pay to learn how to work in jobs that no longer pay, maintaining an economic status-quo none of us really want. As fees rise whilst bursaries and grants are cut, it’s not uncommon to hear of friends working two, even three badly paid jobs to provide the basics of existence: food, clothing and accommodation. Little wonder the mental health crisis amongst students is escalating. And just cos we’re students doesn’t mean we deserve poverty, so wherever we raise the banner of free education we also raise the banner of universal living grants.

Look at how far we have come, and then do not be disheartened at how far we have left to go. Because each step forward raises our expectations, and brings us closer to making our imagination into reality. When we find ourselves atomised, consigned to a lifetime of bad employment and worse debts; rising prejudice and environmental catastrophe – our movement offers a way not only to improve our everyday lives, but to build hope for a shared future.

“We’re demonstrating because we’ve got an alternative” 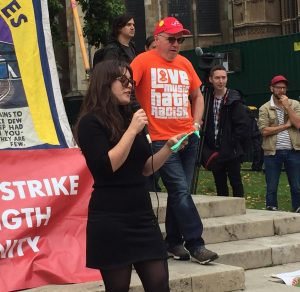 Maisie Sanders is a member of NCAFC NC, a member of the Lewisham Deptford CLP executive and an organiser for Lewisham Young Labour. She edits The Clarion‘s youth pages

I’m Maisie Sanders. I’m a socialist activist in the Labour Party in Lewisham; I’m speaking now on behalf of the National Campaign Against Fees and Cuts. Thanks to everyone who’s come today and mobilised to get people here.

We’ve heard at this rally about the many injustices built into our education system. Universities and colleges are run more and more like businesses. Run to serve the interests of corporations, competing with each other to race to the top of fees and money-making and the bottom of everything else, producing year after year of closures and jobs cuts. Instead of being educated to explore the world ,or empower ourselves, or serve society, or make our lives better we are trained to be more efficient workers to be exploited, if we can find a job when we finish.

We’re demonstrating today because we’ve got an alternative.

We want free education, for all students, whatever sector they’re in and wherever they’re from, with living, universal grants for everyone. We want a truly comprehensive education system, free and accessible for everyone at any point in their life. We want to reverse academisation and marketisation in our schools, and we want our Further Education system refunded and rebuilt. We want free movement, and an end to the persecution of migrants. We want democratic institutions, run by students, workers and the communities they serve. We want control over what we learn, teach, research, so that schools, universities and colleges are spaces for critical thinking, for understanding how society works and how we can change it, for research that fulfils social need.

We’re told that such things are unaffordable. The Paradise Papers showed clearly, once again, what a sick joke that is. There is wealth in society, an unimaginable amount of wealth, but it is in the wrong hands, the hands of the rich few. We need a movement to win a government that will do things differently, that at the very least will tax the rich and take over the banks and financial institutions so we can use some of this wealth for social good.

We’re all excited about the prospect of a Corbyn government, but if prime minister Corbyn is going to deliver real changes, that’s going to take huge organising and pressure around big ideas to keep him on track. We’ve got to where we are now by organising, that’s got to continue and be stepped up.

When we organise, students can shake things, but students can’t transform society alone. And luckily we’re not alone. In the most dynamic struggles we have stood shoulder to shoulder in solidarity with the working class, including on campuses in recent years. Look just down the road at SOAS and LSE where student protests combined with strikes and organising by mainly migrant workers have reversed privatisation and brought cleaning services back in house. We need that kind of movement on a bigger scale. Workers have immense power. After all, it isn’t VCs and principals and senior managers that make our institutions work, it’s the lecturers and admin workers and cleaners and security and catering staff.

Build links with workers in struggle. If you have a job, join a union and organise at work. Strikes by young workers like at McDonald’s and Picturehouse cinemas recently show the way.

So, go back to your campuses and organise. With whatever group you’re part of – a Labour Club, a socialist group, Young Greens, Fossil Free, Defend education, Fem Soc – bring people together and get involved in the Day of Action on November 29th. Organise occupations, walkouts, blockades, local demonstrations, rallies and meetings. If you’re sick of paying too much rent, organise in halls and start a rent strike.

Join the National Campaign Against Fees and Cuts to work together with left-wing student activists and organisers across the country. Come to the NCAFC’s winter conference on 9-10th December. Build the boycott of the National Student Survey. Run in your NUS delegate elections to go to conference so we can transform NUS into a union that really fights. Run in your student union so you can help transform it into a campaigning force too.

Free education is within our grasp, and so is a lot more. If we organise, educate and fight, we can win.