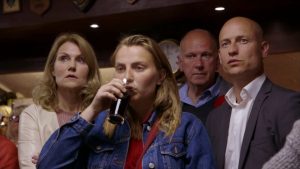 Gemma Short reviews ‘Labour: The summer that changed everything’, available on BBC iPlayer

The image of Stephen Kinnock’s stunned, and perhaps a little disappointed, face as the exit poll comes in on 8 June has been doing the rounds on the internet to much hilarity.

It’s clear that when the BBC set out to make the documentary they expected to be documenting Labour being well and truly humiliated by a Tory party that didn’t only want to go in for the kill, but wanted to play with it’s food first. That, as we now know, did not happen. And whilst it may not have been wrong to be skeptical about how well Labour would do, given the situation, at the start of the election, what is made plain in this documentary is how some remained blind to the changing political situation over the course of the election.

This is partly due to the MPs that the documentary follows. The presenter reports at the start that only a few Labour MPs responded to the request to be followed during the election – Kinnock, Smeeth, Cadbury, and Sarah Champion. Apart from Champion, MPs solidly on the right of the party who had been vocal critics of Corbyn. It’s not hard to see why they agreed so readily. The first half of the documentary spends a lot of times listening to said MPs expousing their views on Corbyn and the new members of the party in their offices, in their cars, to voters on the doorstep.

But whilst most of us noticed a significant change when the Labour manifesto was published, the documentary is late to register this shift. I heard plenty of anti-Corbyn comments from voters when door knocking, but immediately after the publication (in fact the leak) of the manifesto, they were suddenly replaced by conversations about political issues.

The other thing barely brushed upon in the documentary is the huge increase in campaigners out door knocking during the election. An influx of new campaigners is shown in Kinnock’s and Cadbury’s constituencies, to the bemusement of the MPs and the BBC team. A funny moment is captured by the film crew from a car as Cadbury gets out to greet some doorknockers with the politician’s standard “Hello, I think we’ve met briefly before” only to be greeted with a very assured “No. We haven’t”.

The documentary sets up a tale of two elections – the “reality” on the doorstep and the “Corbyn bubble” of big rallies. What it, and the MPs being followed, fail to comprehend is that there was a connection between not only the big rallies and the hugely increased campaigning turn out, but also the increased vote amongst 18-24 year olds. Finally the movement created behind Corbyn was being mobilised.

Towards the end the documentary gives credit where it was due, with the role Momentum played in mobilising members and supporters to campaign, and in fighting the social media election. But it is looking from the outside, unable to understand or analyse the change that is happening in the party.

The documentary is peppered with other interesting insights into the Labour right-wing. Stephen Kinnock and his father Neil Kinnock walking into the count muttering – Neil: “Well it’s still very perplexing, Steve”, Stephen: “well there was … lot of common sense, mainstream, Labour policies in the manifesto”.

And of course the excrutiating, but hilarious moment, where Stephen Kinnock is given the very sound advice that he should keep his mouth shut by his wife, the ex-Prime Minister of Denmark, before he goes to speak to the assembled journalists of the BBC, ITV and Sky shortly after the exit poll.