On 9 November, a couple of hours before Lewisham Deptford CLP’s AGM, the Regional Director issued a notice of postponement. Over the previous three weeks, the seven branches and two forums had been meeting to elect delegates to the AGM and appoint representatives to the Executive Committee. Corbyn supporters had come together to agree a slate of candidates and leafleted the branch meetings to let people know who to support.

The bulk of incumbent CLP Officers were not on the slate; on the incumbent Executive Committee, the Left have been in a minority. The left slate won the support of five of the seven branches and both the BAME and Women’s Forums. It was expected, obviously, that the left would win the AGM.

However, after the last of the branch AGMs, the incumbent Secretary wrote to two Branch Secretaries stating that their delegations did not meet the rules on gender quotas and proposed remediation that would involve removing an elected man and replacing him with an unelected woman. In one case, the unelected women had won nomination for CLP office from other branches or affiliates; the other was an incumbent member of the EC – neither are supporters of the left. The Secretary did this without reference to the Executive Committee or Regional Office. Her interpretation of the rules is disputed by the outgoing and incoming Branch Secretaries and contrary to the advice given at the Conference trainings. 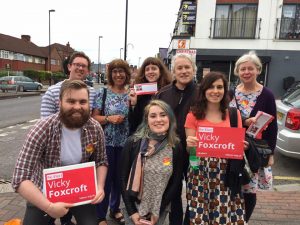 (Lewisham Deptford members out campaigning in the general election)

Then! Over the final weekend before the proposed AGM, the CLP Secretary wrote to Secretary of the largest branch (Brockley) stating that she was asking Region to rule out the Brockley delegation and to seat the previous year’s. Brockley, which now has 28 delegates, had in previous years had strong majorities against the left. Under the proposal to seat last year’s Brockley delegation, I estimate that the left would have lost 17 votes, and our opponents gained eight, a swing of 25. This would also have led to fewer woman at the AGM and fewer BAME delegates and is an outrageous breach of the rules. Appendix 7.IV.6, if you were wondering which defines the term of office for the delegates to the GC.

The CLP Secretary had by this time noticed that a third branch had also failed to meet her interpretation of the gender quota and proposed a remediation, in this case, removing two men from the delegation which the branch accepted. All this time the formal notice of agenda had not been issued, when it was issued it was days late as seven days notice is required for this document.

On the Monday, Regional Office ruled that the 2016/17 Brockley delegation should be used for the AGM!

Activists in Deptford hit the phones and mail systems to try and get this ‘ruling’ overturned, but it didn’t look good. The day before the AGM Skwawkbox published a pretty accurate description of the events leading up to the AGM including the scandalous decision to extend the 2016/17 delegates’ term of office. Region caved in the following day and postponed the CLP AGM to give Brockley time to rerun their delegate election (this takes place on Friday 24 November – 7.45pm at the Leander Centre, Ship Street, SE8 4DH).

On another matter, left-wing executive committee members had been asking for the list of affiliates because nominations had been made by organisations that had not been reported to the EC or GC as new affiliates. When released it showed that the Secretary and Treasurer had not reported numerous new affiliations at the time they occurred, and had accepted affiliations from Socialist Societies who appear to have no local branches. Two of these socialist societies had nominated as their delegates candidates for the CLP executive who had failed to be elected at the Brockley Branch AGM. There were also three delegates missing – guess which way they are expected to vote. The TULO has asked that the 2017 affiliate processing is audited, especially as the treatment of the Musicians’ Union affiliation which the officers rejected, or made clear they would reject their nomination of a third delegate. It would seem to me that this behaviour fails to meet the Objectivity principle in of the seven principles in public life (the Nolan principles) published by the Committee on Standards in Public Life.

Thanks to all those who have helped. I am not sure if we can consider that giving the old guard another month or two to try and overturn the left majority is truly victory, but we are confident that we represent the voice of the members. We will fight to make sure that voice is heard.