The Labour Party in Haringey is currently selecting its candidates for the 2018 local government elections. One issue dominating the selections is the highly controversial Haringey Development Vehicle (HDV). This issue has becoming the dividing line, with the left of the party hoping to achieve a majority of anti-HDV candidates in place by the end of the process, and put a stop to the risky privatisation scheme.

Early signs were worrying, as Council Leader Claire Kober, who was endorsed by George Osborne’s Evening Standard, was comfortably returned in Seven Sisters ward, in disputed circumstances. It was never that likely that Kober would be unseated in that ward, because of the numbers of members signed up in anticipation of the selection. The Labour right also fed the press scare-stories of a Corbynite takeover in the ward. This strategy was intended to scare Kober’s own supporters out to vote, and inflate left-wing expectations only to then disappoint them and demoralise left activists. (See, for example, the crowing on Kober-supporter Dave Hill’s On London blog.)

Soon afterwards, however, Kober’s chief whip Lorna Leith was deselected in Tottenham Hale, replaced by anti-HDV campaigner Ruth Gordon. In Woodside, Pete Mitchell, a sitting pro-HDV councillor, was re-selected, but the other two selected candidates were anti-HDV campaigners, including Mark Blake, a backbencher from another ward and the CLP’s Black and Minority Ethnic Officer, and Lucia das Neves, the CLP’s joint Women’s Officer. 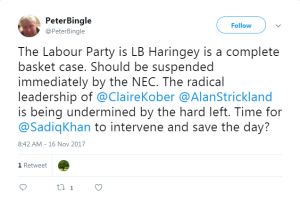 (Who is Peter Bingle? See the Vice article here)

The shortlisting meeting had mixed results as the lines were not clear in the meeting and the case for voting no to re-selection, or “triggering” had not been clearly made to those attending. The system unfairly favours incumbents and means that councillors are not held sufficiently accountable. This was, however, a learning experience for the left from which lessons can be applied to future meetings.

The selection meeting five days later was a clear success for the left. The turnout was large – around one quarter of members attended – with two thirds of those voting for our candidates. This was due to our determination to have a proper conversation about politics with every eligible member. We convinced many who were on the fence or who weren’t aware of what was going on in the council. This success will be sustainable as it has meant we can identify a clear section of left-wingers and encourage them to become more active in the party.

Attention on Wednesday 15th turned to Noel Park ward, where the Cabinet member in charge of the HDV, Alan Strickland is a ward councillor. Sitting councillor Peray Ahmet, who no longer supports the HDV, was comfortably re-selected. Both Strickland and fellow HDV-supporter Stephen Mann were triggered, and will face a strong contest on Monday from anti-HDV candidates Khaled Moyeed and Emine Ibrahim.

The battle to shift the balance of forces on Haringey Council has got off to a strong start. But we cannot afford to be complacent. The Labour left in the Borough is working well together, united around the common goal of stopping the HDV. Between now and the end of the selection process, we must pull out all the stops to ensure victory, as the right will not go down without a fight.

If a majority of left-wing and anti-HDV candidate are selected, it opens up huge potential to debate and discuss what the “Corbynite” left should do in power in local government. Events in Haringey, then, could soon prefigure issues of national significance.