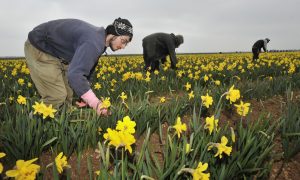 (Labour Campaign for Free Movement supporter Don Flynn wrote a response to David Pavett’s criticism’s of free movement on the Left Futures blog. This is John Penney’s reply. Although the Clarion editors agree with Don and support the LCFM, we publish John’s reply to keep the debate going.)

It is very strange that Don Flynn claims his proposal for world-wide freedom of movement of labour across all state boundaries – chasing after the work provided by ever-more mobile globalised capitalism, is in line with “a class- based socialist response” to, presumably, the tyranny of capitalism.

Because, historically, socialists have offered a radically different , comprehensive, political response to the anarchic tyranny of the capitalist marketplace. And this hasn’t been, as Don does, just to ACCEPT the eternal power of globalised market forces to move the productive resources, and labour, around the globe, purely driven by the search for the lowest cost base.

Socialists have always been in the vanguard of working class struggle to oppose, ameliorate and when possible, direct and restrict the capitalist freedom to move money and physical capital and its related jobs around the globe, via, firstly, defensive trades union organisation and struggle. Secondly, via mass political organisation and struggle , armed with a completely different socialist vision for initially a set of socialist states, and eventually a socialist world order , run on completely different, non capitalist, democratically planned lines – beyond the profit-seeking capitalist marketplace.

At present almost all political struggle is still, unfortunately, carried out on the basis of individual nation states. The struggle within each nation state for socialism, or even serious pro working class Left social democracy , in which the capitalist market, in a mixed economy, is constrained and directed within a democratic national plan, vitally presupposes a state with a Left government seeking to break from the power of the globalised capitalist markets, must be able to manage and plan , both flows and uses of capital, but also the labour supply within its borders – so as to safeguard its citizens from precisely the “uberisation” or casualization, of the labour market which we see in the UK today in the dreadful labour practices of employers like Sports Direct, etc, – able to do as they wish on wages and conditions because of strong anti trades union laws and an unlimited EU-wide labour supply.

Don Flynn likes to fling about occasional verbiage about “socialism” , and posture his unlimited sympathy for migrant labour – although he seems to see nothing wrong with the working classes of the world having to constantly uproot themselves from their communities to pursue ever more mobile capital’s job markets all over the globe ! This is not any sort of “freedom” , Don, but the most coercive oppressive power of the capitalist market – reducing humans to a globally mobile factor of production.

Very noticeably, Don never has anything concrete to offer as a system-wide alternative to the globalised capitalist market. And why not ? Because, despite his throwaway flagging up of the word “socialist” occasionally, Don is actually just another sentimental liberal, completely lacking any vision of a society beyond the marketplace. He completely accepts the currently dominant neoliberal model of a permanent capitalist market dominated world – a world in which a tiny class of share-interconnected super-rich capitalists own and control most of the planet’s resources, and in which the world’s vastly more numerous working classes have only the “freedom” to work for wages for this tiny class of exploiters. Socialists, unlike Don, seek to strip away the grossly disproportionate wealth ownership of the 0.0001 percent of capitalist super-rich via progressive taxation and nationalisation of their productive wealth, not just accept this as a “given”.

So strip away all the liberal tear-stained sympathy about the migrant workers of the world that Don has hawked around the gullible liberal and leftish mass media for decades, and what you have is a liberal ideologue unprepared to challenge in any way the neoliberal dynamics of a globalised capitalist system which demands the ability to move the productive resources of any society anywhere in the world it wants, with no regard for local communities left without work – unless they can trek across entire oceans to work in the new temporary home of this productive capital – but at a half or less of their previous wage.

Don is a true neoliberal ideologue, hiding his complete acceptance of the fundamental rights of Capital, behind a bogus concern for the “freedom” of workers to work anywhere — a “freedom” which is actually to be dragged all over the globe to be exploited for their labour power. A “freedom” which will also find the communities assigned by capital to receive vast new inputs of labour supply, without the required pre-planned housing and health and other infrastructure resources required to support hugely increased populations. I’m afraid Don’s claim that his group campaigns for strong trades unionism and a massive increase in council house building and infrastructure , is pure sophistry.

No they don’t: they are just pursuing an obsession with international unrestricted freedom of movement. It is logically impossible anyway for the UK, or any state, to even guestimate how many council houses, or hospitals , or any other resource would be required under a situation of complete freedom of movement – because by its very nature , unplanned freedom of movement is wildly unpredictable – flowing entirely at the profit seeking whims of globalised Capitalism. So Don’s addition of this “demand” is pure hogwash , to try and cover up the complete inoperable nonsense that the demand for a global right of population movement into the UK, or any other state, represents.

That so many of the self-identifying “Left” liberals in the UK have fallen for this unworkable, neoliberalism-assisting, neoliberal dogma, concealed within the pious , virtue signalling, do-goodery, of “freedom of movement”, is a testament to the decline of socialist knowledge and theory during the last 30 years of neoliberal ideological hegemony in the UK.