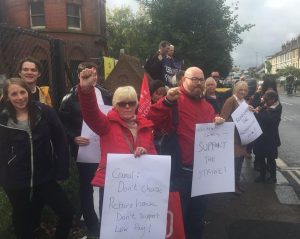 Lewisham Momentum welcomes the decision by Mayor Steve Bullock not to give the Ladywell Playtower redevelopment contract to Picturehouse Cinemas. This follows a lively campaign by local Labour, Momentum and trade union members, working with the Picturehouse workers, to insist that Picturehouse should not be given the contract unless it met its striking workers’ demands, including the London Living Wage, and reinstated their sacked union reps at the Ritzy in Brixton.

This is an embarrassing debacle for Picturehouse management and a clear victory for the campaign. Lewisham council carried out an extensive and rigorous process, but there is plenty to suggest that without our political pressure the contract might have been awarded to Picturehouse.

Coordinated submissions to the consultation, two lobbies of the Mayor, delegations, a protest at the Playtower, a petition signed by over 8,000 people, raising the issue in local Labour Parties and unions, a statement from over a hundred prominent Lewisham Labour activists, support from councillors – had an impact.

We will continue to campaign in support of the Picturehouse workers and do our bit to make sure they win their strike. We will also seek to establish links with the Curzon workers, who despite having won union recognition and the London Living Wage, have their own complaints against their management, who are attempting to chisel away at the Living Wage (see, sign and share the workers’ petition on this – here).

From our point of view, there are no “good” capitalist employers: all workers should organise and win as much as they can get. In this campaign we were never advocates of Curzon: what we wanted was a defeat for Picturehouse to help the Picturehouse workers – who are calling for a boycott of the company in the face of refusal of union recognition, the sacking of their reps and an attempt to break their strike – win.

Thanks and well done to everyone involved in this campaign. More soon.