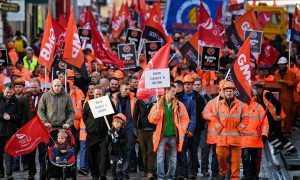 In an historic move, BiFab workers in Scotland have assumed control of their work yard, staging a work-in described as the biggest industrial dispute in a generation.

1,400 jobs are reliant on crisis-hit Burntisland Fabrications, the firm manufactures equipment for both the oil and gas and renewables sector. Due to a contractual dispute with Dutch-owned Seaway Heavy Lifting, the employer said it may have to close down.

Based in Fife, the yards have offered relatively high quality employment to locals for generations. Many have said the closure would have an impact similar in scale to the coal pit closures which also rocked the Fife community.

Occupying the yard, workers have pledged that nothing will removed until the contract is delivered and the dispute resolved, even though they face not being paid for the work they do. One protester explained they took this move to show the viability of the jobs and the strength of feeling from the workforce.

A thousand trade unionists marched on the Scottish Parliament in a bid to raise awareness of the plight and to demand immediate action from politicians to save the workforce from unemployment.

GMB Scotland secretary Gary Smith said at the rally that their resolve was only growing, and that they would not allow the yards to close and become another museum of Scotland’s industry.

One of the shop stewards also said they were pushing for 100 percent unionisation of the workforce following the start of the dispute. The support from GMB and Unite was described as “fantastic.”

With explicitly socialist demands, speakers at the rally called for politicians to halt the erosion of industry, ensuring that jobs were available and no one was forced to rely on the welfare system. One protester also criticised the increasing reliance of agency staff, saying that it made it too easy for employers to lay off.

Left-wing Scottish Labour leadership contender Richard Leonard said that if elected he would make the dispute a priority. Part of his leadership campaign has been a focus on an industrial strategy for Scotland which plans an economy beneficial to workers rather than simply responding to crises like the BiFab dispute.

The action taken by BiFab workers will have an impact beyond their own workplace, it will set a strong precedent for workers’ control and fighting for full employment. We must help them win.

• For a motion in support of the BiFab workers passed by Edinburgh Central CLP, to adapt for your own CLP, see here. 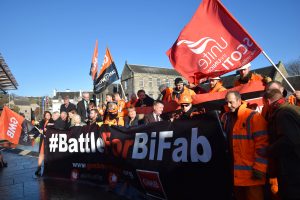 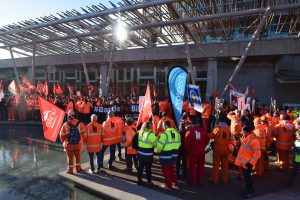 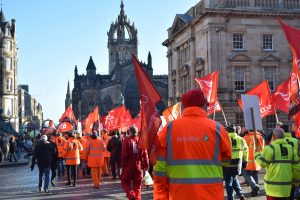