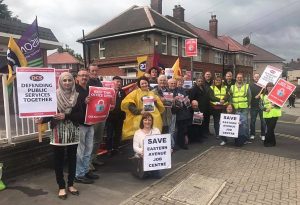 In January this year the DWP announced its intention to close over a hundred workplaces throughout the country by March 2018. The majority of these would be Jobcentres with a handful of back-office processing and Corporate HQ buildings also for the chop.

These closures represent the largest cull of public-sector workplaces for decades and a substantial roll-back of the welfare state from many areas. Much of the closures are small local Jobcentres serving communities who have no other access to public services.

Equally, this cannot be separated from the government’s wider welfare “reform” agenda. Cutting vital local services is part-and-parcel of moving social-security back from a safety-net to the workhouse. With DWP workers already overstretched, even before the huge increase in work resulting from Universal Credit, these closures only serve to cement the staffing crisis in the DWP and the resulting poor service, delays to payments and erroneous and unfair decisions made against claimants. A regime which will only worsen with the appallingly unfair Universal Credit regime which is being rolled out across the entire country shortly.

Not only do the closures prevent many people from accessing vital public services, but the conditionality of the current benefit regime, which will worsen with the national roll-out of Universal Credit, means that many claimants will be forced to spend large sums of money travelling unreasonable distances to regular appointments with Advisors. If they are late they will be liable to considerable sanctions to their benefits. The controversial roll-out also means that at this time more than ever, claimants require the most help and support from JCP workers.

The Pubic and Commercial Services Union, which organises the majority of civil servants working for the DWP, obviously oppose the closures and have organised public meetings and briefed the Labour front-bench to oppose in Parliament. However, they also took the decision not to hold a national ballot to oppose the closures. Instead devolving such responsibility to individual branches or workplaces to submit bids for action.

So far only a handful of such requests have been made and only five workplaces balloted have reached the 50% threshold.

Of those only one is still taking action, Eastern Avenue JCP in Sheffield, a Jobcentre serving a particularly deprived area of the city. Workers at Eastern Avenue took 44 days of strike action (that is not a typo!) before returning to work together, their heads held high.

The demands are simple: Their community needs this public service and they need these local jobs: Stop the closure.

The largest workplace voting to join the action is Plymouth Processing Centre, where more than 250 PCS members started their strike on the 6th of November.

The position of the Labour front-bench should be clear: These closures must be stopped and reversed. The chronic lack of staffing in the DWP needs to be addressed by the immediate acceptance of the PCS staffing claim. Plans need to be drawn up to completely replace the Tories inhumane, reckless and unsustainable welfare reform agenda which minimally should include an end to conditionality, a considerable uprating of the level of benefits.

Labour Party branches and MPs should take a leaf out of the book of Louise Haigh MP and Sheffield Heeley CLP, where Eastern Avenue JCP is located: pass motions in support of the strikes, attend the picket-lines, give money to the strike funds and put pressure on the government in Parliament. 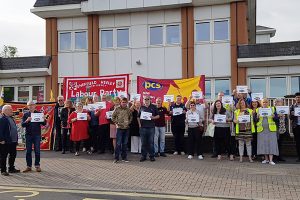