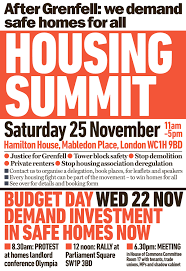 See also: “A radical programme of action”, by Martin Wicks

After Grenfell, housing policy and what it’s doing to our communities has rarely been more in the political, media or public eye.

Housing campaigns are popping up all over the country. In Bath, Southend and Rochdale housing association tenants are fighting the demolition of their homes. Council tenants on at least 50 estates in London are doing the same. As housing associations become more corporate,tenants of Notting Hill Group and Genesis are fighting the latest mega-merger. In Newham, One Housing Group has backed away from a 40% rent rise targeting “key workers” in our NHS and schools. In Bristol and Sheffield, the Acorn campaign group is one of several helping to organise hyper-exploited private tenants. People in Haringey are opposing a fire sale of public assets to the same property developers who asset-stripped the Heygate estate in Southwark.

Housing is now a critical political issue — a vote winner and a vote loser. Amidst Brexit chaos,the government’s housing policy is in complete disarray. Under huge pressure, it had to drop or shelve elements of its potentially ruinous Housing and Planning Act. Its February White Paper admitted the housing market was “broken”, but offered no solutions. Now it’s planning a Green Paper, but as Theresa May’s conference speech confirmed, they don’t know what they’re doing.

This creates a huge opportunity for Labour. The housing crisis is national and historic in scale. Millions of people are suffering. Homelessness has risen by 60% since 2011, 1.8 million households are on council waiting lists and many more are condemned to sub-standard, over-priced and under-regulated private renting. Across much of the country, the gap between average earnings and average house prices has never been greater. Universal Credit will only makes things worse. Lives are being ruined by our decades-long obsession with the housing market, which receives £20 in government subsidies for every £1 invested in affordable rented homes.

Jeremy Corbyn has been a supporter of grassroots housing campaigns for many years. Unlike most politicians of his generation, he gets council housing and isn’t embarrassed to talk about it. As he said in one of his first speeches as leader “There’s no solution to the housing crisis that doesn’t start with council housing”. His commitment that a future Labour government will build one million homes in five years, of which half will be council homes, has won him and Labour widespread support. Council housing isn’t a panacea, but it is the route to reducing housing need.

But there are worrying signs of attempts to dilute Corbyn’s pledge. Some Labour politicians still talk about “social”, or the even more meaningless “affordable” housing.

These terms are widely discredited because of the increasingly commercial role of housing associations who now build more homes for the private market than for genuinely affordable rent. They have failed to fill the gap in housing provision left when councils stopped building. Whatever their benevolent origins, many housing associations are now indistinguishable from private property developers. If they are to play a part in future Labour housing policy,they must be brought under proper democratic control and reminded of their social purpose.

For too long, Labour councils have been complicit in policies that, as Corbyn said in Brighton, are now widely seen as social cleansing in the name of so-called regeneration.It has to stop. At the very least, any such projects should be subject to a ballot of local residents before they go ahead. But more fundamentally, we need policies that put local people in control of what happens in their communities, not property companies.

Labour policy also needs to set housing in its wider context: the knock-on effects on health, education,social care and other public services that shape our quality of life. We need a break from the false economies of the past that are sacrificing a whole generation on the altar of the market. We need to rethink the place of housing in society and see it as a social asset, not a private commodity.

Many said the Grenfell tragedy had to be a turning point, but we need more than words. Labour and Momentum must step up their involvement in local housing campaigns and help build the national movement to demand decent, secure, truly affordable and safe homes for all.

That’s the purpose ofthe housing summit on 25 November at NUT HQ in London. What we do – and don’t do – over the next two years will decide housing policy in the UK for the next generation.