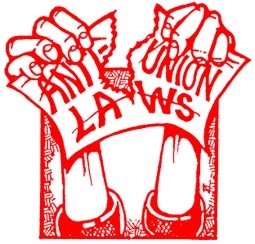 At the end of September, Labour Party conference voted unanimously for a motion to scrap the anti-trade union laws – not just the 2016 Trade Union Act, but also “anti-union laws introduced in the 1980s and 90s” by the Thatcher and Major Tory governments. “For unions to be effective”, the motion said, “workers need an effective right to strike”. Much of the text, including the bits quoted here, came from the model motion promoted by The Clarion.

This builds on the motion passed – also unanimously – by conference in 2015, which called on the next Labour government to “legislate for strong rights to unionise,win recognition and collective bargaining, strike, picket and take solidarity action”, ie everything that makes trade unionism effective.

After decades of defending the Thatcherite anti-union laws, Labour now has strong policy against them. We must fight to ensure it is carried out, both in the party’s campaigning now and in government.

Despite a long history of fighting the anti-union laws, Corbyn and McDonnell have often recently tended to merge into the Labour establishment line of just “repealing the Trade Union Act”. During the general on campaign, Labour’s election coordinator Andrew Gwynne told the Guardian that the party just wanted to return to the situation that existed in 2015 – and no one contradicted him.

We should follow up on the conference vote with a strong campaign throughout the labour movement. The motion passed at October’s Young Labour conference making the same demands is a good start. We need to take this into every CLP and union branch and use Labour’s new policy as a starting point to put repealing the anti-union laws back on the political agenda. With upcoming battles like the Royal Mail strike, this is urgent.