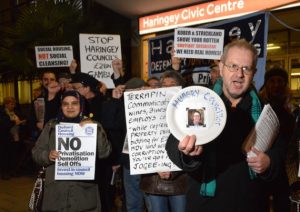 Phil Rose, who is centrally involved in Haringey’s StopHDV campaign, spoke to The Clarion.

The HDV is a company that will be jointly owned, 50% each, by Haringey council and the multinational firm Lendlease. Haringey will be put land and assetsinto the deal.They originally said that would be worth £2 billion, though they have since claimed less.

Lendlease will put in an equivalent amoung, borrowing against the company. It’s a limited liability partnership. If it goes bankrupt, Haringey will lose all its property, but Lendlease will lose nothing.

Lendlease will carry out all the maintenance, and make money,while the HDV makes nothing. They will be able to charge pretty much what they like. Haringey will be handing over to a company with a record of overcharging all over the world – they have just had to make a multi-million settlement with New York State because this problem got so out of hand.

The council says it will have a veto, but that’s blatantly not true – it’s 50-50. In France public authorities have to have at least 51pc, for this very reason. This lack of veto will hand Lend lease a free run at overcharging

The people who lives on the estates taken over by the HDV – it will happen in tranches – will be moved off. The council says there’s a guarantee they can come back, but that’s not what the official business plan says. The council said, oh, we’ll change that, but they haven’t. In any case, it will take years for people to come back – and many won’t want to.Those who do come back will come back to completely different buildings,with “poor doors”for instance.

And that’s not the worst of it. When people move back, these will no longer be council houses. People living in them will not have the same rights. HDV will operate like a private company,with the fundamental goal of making profits. It will not be covered by the Human Rights Act, the Equality Act, or Freedom of Information, in the way the council is.

The council leadership says they are doing this to tackle homelessness in Haringey, but this is surreal, because under this scheme the council will lose its right to nominate who gets a home. Taking thousands of tenancies out of council control will make the problem worse!

Why is a Labour council doing this?

It’s intriguing because on one level,this is so extreme, you’d think even Blairites would oppose it, anyone in the Labour Party really. And principles aside, it’s not good politics either, alienating your entire community. The Lib Dems have opposed the HDV so there’s a real possibility they will suge in the 2018 council elections. Some areas of the borough are very safely Labour, but some aren’t. So it’s madness and hard to explain,to be honest,though there was a recent article in Vice that people should read [see here]

I’ve read their supporters saying that the campaign against the HDV is middle-class.

This is typical nonsense. We’re a broadbased campaign that includes some middle-class people in areas like Highgate and Muswell Hill but also working-class people in Broadwater Farm and Northumberland Park. Look at who’s turned out for our recent protests and actions, it’s a very diverse group of people – representing the entire Haringey community, pretty much. Last night, at the AGM of the Northumberland Park residents’ association, which has previously been stuffed with supporters of the council, our people won six of the eleven places on the committee. Perhaps they were manipulated by middle-class campaigners? This is a typical patronising and manipulative attitude to working-class people.

The reality is that it is the council leadership and their supporters in the press who are well off middle-class and who are afraid of a broad based community movement that would take away properties for rent and create more council housing.

So what happens now?

The big thing at present is the judicial review which took place last week. Obviously we don’t
know what will happen, what we hope for is that he will order them to start again which will cause a delay which is important as it allows the electoral process to decide what happens. By fighting the court all the way they have potentially delayed things further and made life more difficult for themselves.Either they are stupidly stubborn, which is entirely possible, or there’s something we don’t know. Anyway, good!

There’s a risk of the council imposing the deal before next year’s elections, but it’s not straightforward for them. That would alienate even more people, and the courts. Lendlease may not be willing.Even if they ended up getting compensation, they might have to sue for it, and suing a poor borough in that way would be a PR disaster. In any case, they probably don’t want the risk and uncertainity.

I also suspect that the council rushing to sign the deal will make them more vulnerable to further legal challenges. So we have a chance.

What’s your view on how Labour councils should deal with the cuts they face?

The HDV campaign is made up of lots of different people and organisations, and we focus on the HDV. We don’t have an official position on the wider issues. In any case there is a lot Labour councils can do to support ordinary people rather than big property developers.That’s the most important first step.

What involvement has the Labour Party, as a party, had in this campaign?

Many individuals from the Labour Party, including myself obviously, are involved. Labour hasn’t been a campaigning party for a long time. It remains a party focused on getting people elected. This is my biggest frustration and something we need to work on changing.