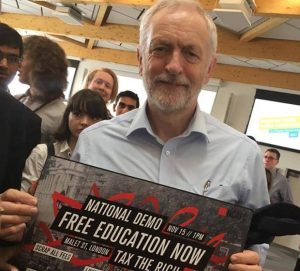 On the weekend of 14-15 October, around 300 Young Labour members met at the University of Warwick for Policy Conference, to discuss policies to submit to the National Policy Forum and hopefully the next Labour Party manifesto.

The very first motion of the conference, submitted by Clarion supporter Zack Murrell-Dowson, calling for nationalisation of the banking sector, passed by a big margin. We insisted that a Labour government should place these assets and under democratic control, unlike Brown’s bailout after the financial crisis.

Other motions called for repealing all anti-trade union laws, a £10 per hour living wage for all workers, and supporting all strikes.

Saturday afternoon saw Q&A sessions with Jeremy Corbyn and Cat Smith. After the obligatory chanting and whooping, Corbyn settled down to answer a series of bland questions. Cat Smith’s speech focused especially on young members’ contribution at the general election,thanking us for our support on the #LabourDoorstep. The next task, she said, was winning a vote in Parliament on votes at 16. This speech came across as accepting that young members are doorstep fodder or only useful for sharing content on social media. We continue with our work to create a network of Young Labour groups across the country that campaigns in schools, streets and on picket lines.

After the speeches, there followed a large swath of uncontroversial motions that passed almost unanimously.While the content of the motions was largely ok, it is a problem that delegates were not allowed to amend motions. It was not possible to explore nuances without taking a speech against a motion and looking like a bigot.

The three most debated motions came on Sunday. Some comrades proposed one for a two-state solution for Israel/Palestine. Many on the left opposed, arguing that most Palestinians support the Boycott, Divestment and Sanctions (BDS) movement against Israel. The motion fell by two votes. Clarion supporters voted different ways.

Our motion to defend and extend freedom of movement was defeated after being denounced on the grounds that “the European Union is a capitalist cabal” and “we need to dismantle Fortress Europe”. As if pulling up the drawbridge over the Channel would improve things!

We supported a motion for the UK leaving NATO. Kate Dearden, former Chair of Labour Students, claimed that NATO had been “one of the greatest achievements of Clement Attlee’s Labour government”, but the motion narrowly passed by four votes, with 37 abstentions.

The next stage is the NPF, where it is likely most of our motions will be diluted or completely ignored. We continue to create vibrant Young Labour groups to raise the political level of young people across the country.