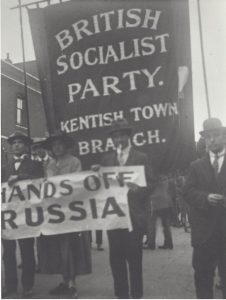 From the summer of 1918, significant UK armed forces actively intervened in Russia to help crush the Bolshevik government. Over the next three years, socialists in Britain built an impressive movement of solidarity. This appeal, from August 1918, was issued by the British Socialist Party, a Labour Party-affiliate soon to become a central component in the new Communist Party, as socialists in Britain united under the influence of the Russian revolution.

Deaf to the protests of financiers, but inspired by the ideals of international labour, the Bolsheviks are wresting the main industries from the hands of their capitalist owners, declaring the means of production to be the common property of the Russian people, and imposing on the workers in each industry the responsibility for its control. Hence every capitalist and financier, whatever his nationality, cries, ‘Down with the Bolsheviks!’

In placing the power of the franchise in the hands of the workers, soldiers and peasants, the Bolsheviks swept away the false bases for the right to vote known to western nations, such as property qualifications or, in the case of women, age and marriage, and made the title to vote dependent upon the performance of social labour. Hence every reactionary, whatever his nationality,fearing the consequence of a labour franchise, cries, ‘Down with the Bolsheviks!’

Their enemies allege that the Bolsheviks have made mistakes and committed excesses. But what are their alleged mistakes and excesses compared with the known crimes of their critics who rule the world now? … It is because the control of natural resources by labour is dreaded by the great majority of the rich and wealthy that they call for war on the Russian socialist republic.

The British Socialist Party therefore urges all organisations whose members realise that the defeat of Russian socialism is the defeat of labour everywhere, to pass the following resolution and make it known as widely as possible:

“This meeting of workers protests against the armed intervention in Russia in opposition to the declared wishes of the soviet government and in direct contradiction to the Allies’ pronouncement in favour of the self-determination of all nations. This meeting believes that the overthrow of the soviet administration would be a disaster to the organised labour movement throughout the world, and could only be construed as evidence of the intention of governments to make war on the working class. It calls upon the British government to abandon its present policy with regard to Russia and instead to offer Russia the technical and economic aid required for her reconstruction.”