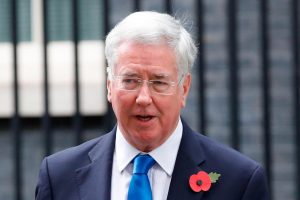 This article was written for Clarion issue 10 about a week ago. Since then events, including in the Labour Party and on the left, have moved fast. We will carry more coverage, including of the discussion in Labour, very soon.

I’m reminded of dominoes or a house of cards when thinking about the way the sexual harassment scandal has led to more and more allegations about more and more men.

There has been multiple revelations about Tory MPs. This includes Stephen Crabb, former work and pensions secretary, and trade minister Mark Garnier, as well as 18 other current ministers. From touching women inappropriately, to sexual language and requests to shop for sex toys, to outright sexual assault — the allegations are disturbing.

As Theresa May spins from one disaster to another, anyone tempted to feel for the despicable woman would think again as it was also revealed that she was appraised of much of this unpleasant and unlawful behaviour in weekly briefings. If more proof were needed that having a woman in power doesn’t mean things get better for women, then this is it. Theresa May, aider and abetter of sexual harassment.

Labour are likely to fare little better as the dominoes continue to fall. Jared O’Mara has already been suspended for his disgusting comments and lets not forget the conduct of one Simon Danczuk, previously Labour MP for Rochdale, who was deselected after it was revealed he was sexting a 17 year old girl who had applied for a job in his office.

What was equally shocking about the Simon Danzcuk affair was the overwhelming silence from the women who had so loudly decried sexism from Corbyn supporters. Jess Phillips took to twitter to suggest people shouldn’t “delight” in the reports about the MP. This coming from the woman who seemed to positively relish any and every opportunity to accuse Corbyn supporters of sexism and joined in a sexist and racist mockery of Diane Abbott to boot.

It is likely that more of Phillips’ political allies will come a cropper as allegations continue to be made.

A deadly combination of wealth and power has made some MPs feel untouchable. Of course,sexual harrssment and abuse is also perpetrated by men with no wealth and little power, but there are particular circumstance with MPs.

Often MPs consider themselves to have a job for life. A well paid job, with a lot of perks and a great deal of power. For many, mainly Tories, it is just an extension of the power they have had through their wealth and connections. The treatment of women as yet another “perk of the job”seems endemic, and accompanies an embedded sense of entitlement. Danczuk was, reportedly, inappropriate in his interactions with women for years, but seemed untouchable.There are very few mechanisms through which you can hold MPs to account for this behaviour.

Who do you report them to? Whether their “boss” does anything can depend on whether they are a political ally or an enemy. Many women will have remained silent because there was nowhere for them to speak. Those that do can be wilfully ignored, as illustrated by Liz Saville Roberts MP’s report of a female staffer who reported instances of sexual abuse in parliament four times but had nothing done.

The opportunities to remove sitting MPs through deselection are small. In the Labour Party we need to end the structures and culture where MPs are seen as sacrosanct and unchallengeable. The opportunities for the electorate to hold an MP to account are non-existent barring a wait for the next election.This is not good enough.

The Tories’ own investigations show there are at least 36 of who appear guilty of this. But while they may lose a ministerial position or the party whip for a time, it is unlikely any of them will lose their jobs. That needs to change.