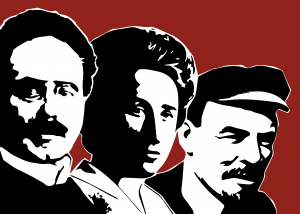 On the eve of February 1917, none other than Lenin gave a speech in which he said, resignedly, “We of the older generation may not live to see the decisive battles of this coming revolution”. In the next month the Tsar was overthrown. Whatever being a revolutionary requires, we can be certain that it does not require the power of prophecy.

October 1917 remains an enduring turning point in the history of the socialist and labour movements. It was the Bolsheviks who, in Luxemburg’s words, “went ahead as an example to the proletariat of the world” and dared to conquer political power. At the time, and even still today, the revolution made by the Bolsheviks remains one of the most incandescently audacious acts ever achieved by the world labour movement.

What were the makings of the many thousands of people willing to make this dare? What can we learn from them today?

It is not the intention of this article to craft a beautiful history of each of those thousand revolutionaries, but sketch a few brief guiding notes.

First, an obstinate determination that society would be changed by their own hands and to refuse any compromise with those who would take the revolution from them. In 1917, this meant lending no legitimacy to the Kerensky government, and declaring the workers’ interests as fundamentally opposed to an imperialist government continuing the war, regardless of the latter’s sweet words and promises. Now it means vigorously asserting the political independence of the labour movement and to organise ourselves as a class. Revolutionaries do not see politics as a game of musical chairs to play oh-so strategically at the very top of the bourgeois state, but as a movement to abolish those chairs and that game. Revolutionaries do not make peace with the present order of things, but constantly strive to change it.

Second, to be unafraid of being in a minority. Lenin found no friend after his initial arrival in Russia. Even in the ranks of the Bolsheviks, very few were willing to be open political allies of his explosive April Theses, in which he called for no support for the Provisional Government and the building of a new International. Even those sympathetic to him thought that perhaps his long time in exile meant he was simply out of tune with the democratic developments following the February Revolution.

Yet Lenin exhibited a sharp political clarity, recognising the Provisional Government as inseparable from its continuation of an imperialist war. He spurned the ideology of “revolutionary defencism” that had become prevalent amongst Russian Social Democrats, in which they argued the social and political character of proceeding with war had changed, owing to the change in who was carrying it out. Clearly and simply, Lenin declared in April “Consolidation with the defensists – that is betrayal of socialism. I think it would be better to stand alone like Liebknecht – one against a hundred and ten.”

Karl Liebknecht was the only Reichstag deputy to vote against war credits in August 1914. This is not to say that revolutionaries take pride in isolation and in taking doomed, yet heroic stances. Rather, it is better to be in a minority and to speak a truth than chase fashionable clichés which will discredit you when they collapse. The oppressed came to the Bolsheviks in October 1917, as Lenin argued they would, because it was the Bolsheviks who consistently and intransigently pushed forward a programme which corresponded to their needs and refused to make peace with a government opposed to their interests.

In other words, the way out of being in a minority is not to sacrifice a socialist position on the altar of “public opinion” but to carry out a process of persistent dialogue in the labour movement and patiently convince people of your ideas and tactics.

Third, revolutionaries are not in the business of establishing themselves as great men or women, upon whom the world depends. It is the practical and sober study of how the world works and how it can be changed. Human liberation does not hinge upon the outstanding nature of individuals, but every one of us in a mass movement knowing the right moment to throw a wrench in the barbarous works of the world.In the words of Victor Serge: “We must be precise, clear-sighted, strong, unyielding, armed: like machines, you see. To set up a vast enterprise for demolition and to throw ourselves into it with our whole being because we know we cannot live as long as the world has not been made over.”

There are no certainties about what can be achieved. But there is honour and hope in being willing to make the dare.