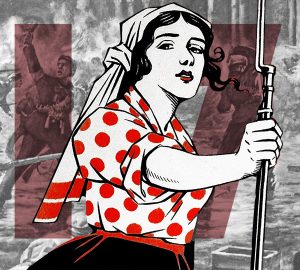 The congress voted to join the Communist International. The majority merged with the already-existing but much smaller Communist Party of Germany, founded by Rosa Luxemburg, Karl Liebknecht, and Clara Zetkin. Only a right-wing rump continued the USPD name, and most of them collapsed into the SPD in September 1922.

The new united Communist Party became the strongest revolutionary socialist party outside Russia. That was grievously late: revolutionary opportunities in 1919 and early 1920 had already been missed, while the CP was small and unconsolidated.

In October 1923 the new mass CP came to the brink of leading a revolution. The proto-Stalinist bureaucratic influences in the Communist International – not yet all-shaping, but already strong – and the weaknesses of the German CP’s own leadership meant that opportunity was missed. In the following years of relative stabilisation of German capitalism, the grip of Stalinism tightened. A new and tragic chapter began. The end of that chapter: Hitler. The German capitalist class taking bloody revenge for the annoyances and concessions inflicted on them after 1918.

Zinoviev recalled a previous visit to a Social Democratic Party congress, before World War 1 and the split of 1916-7 over war policy which produced the USPD.

That, he said in 1920, was “around ten years ago”, so, around 1910. The SPD was proud and confident,with approaching one million members and a growing and very loyal electorate. By 1912 it would be the biggest party in the German parliament.

The Russian socialists, by contrast,were on the defensive. A wave of revolt and mass strikes in 1905 had been defeated. The Tsar’s new minister Stolypin, combined fierce repression with measured social transformations from above.

According to Trotsky’s later account, the Bolsheviks were down to 30 or 40 reliable activists in regular communication across the whole of Russia. They had just parted ways with an ultra-left faction, the Vpered group. The Mensheviks, with whom the Bolsheviks were still in a common party, were in no better condition, and grievously divided among themselves.

Zinoviev recalled that the German party’s secretary, Friedrich Ebert, known for his efficiency and stamina but not for any revolutionary flair, had “laughed at our Russian grouplets and said: ‘There are so many grouplets in Russia’.”

Ten years later,Ebert had become (in late 1918) simultaneously Chancellor of the bourgeois coalition government set up in collaboration with the army general staff to “save” German capitalism after defeat in World War 1, and chair of a Council of People’s Commissars.

They pushed through a number of reforms. They promised they would move to socialist measures, but those first had to be prepared and planned by careful committees and commissions.

The socialist plans faded. Ebert became president of the German Republic from 1919-25, and his party became the means of heading off the German working class from the social revolution which it had wanted to make.

Ebert, or at least some of his colleagues, may have sincerely wanted socialism, in some general sense.But,faced with social ferment, their priority was to restore stability – which meant restabilising capitalist rule.

The USPD made a better claim to continue the tradition of the pre-1914 SPD than Ebert did. But in the years of revolutionary upheaval, they were indecisive. The revolutionary sailors whose mutiny sparked the revolution in 1918 went to Berlin to seek advice from the USPD secretary, Luise Zietz. She was no counter-revolutionary, but she had no idea what to suggest.

The old SPD radical left,round Rosa Luxemburg, Karl Liebknecht, and Clara Zetkin, did what they could. But they had no well-based, educated, coherent organisation, only a Communist Party, mostly of very young activists, hastily assembled in the midst of revolutionary turmoil.

And the “grouplets” in Russia? The difference is that, through good times and bad, they had always educated themselves, discussed, and organised in order to prepare themselves not just for the day-to-day piecemeal tasks (though they did those), but for action in periods of revolutionary upheaval and tumult.

When the February Revolution of 1917 burst open them,they were surprised, but they quickly geared themselves to the new times, and built up the strength,the courage, and the sense of initiative that would enable them to lead the workers to power in October 1917.

The Corbyn surge of 2015 was as unexpected to the whole left as the November 1918 mutinies were to the German left, or the February Revolution of 1917 to the Russian left.

Too many on the left had spent the previous years focused only on unambitious day-to-day protest, dismissing education and debate about more radical prospects as sectarian luxuries.

The result has been a team around Corbyn assembled helter-skelter by skimming the top layers of bourgeois society (the Guardian, PR firms, the London Mayor’s office, union officialdom) for left-wingers, but left-wingers who previously had been pursuing sedate careers in the assigned leftwing spaces of bourgeois society, not organising to stir up the rank and file. As Alex Nunns puts it in his very sympathetic book on Corbyn, “In no sense was [Corbyn] or his team ready” for the challenges of party leadership.

Thus the fumblings, most notably on party democracy and on Brexit and free movement.

We still have time to turn things round. The lesson for us from a hundred years ago is that socialist politics based on complacent perspectives of gradual improvements is a snare and an illusion. The future depends on those whom the complacent mock as“so many grouplets”.