“This is an important dispute, in which the Royal Mail workers will need support from the whole labour movement. Labour and other unions should mobilise at every level to support them, linking this to a vocal and active public campaign for renationalisation of Royal Mail.

“A renationalised Royal Mail should be democratically reorganised to benefit its customers and workforce, along the sort of lines advocated by Jeremy Corbyn for the railways in his first leadership election.”

That was the unanimous message from Stretford and Urmston CLP when they met in early October at a meeting with over 80 members present.

An emergency motion was agreed by local activists and CWU reps using The Clarion’s model motion and,to make sure Labour Party members knew about the issues, we reprinted the material from The Clarion’s website as a flyer at the CLP. A local CWU postal member and Labour councillor, Laurence Walsh, put it forward. 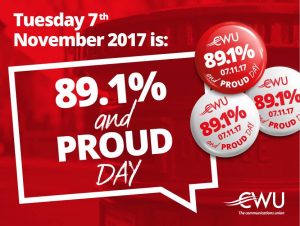 (The CWU isn’t taking the court ruling lying down.
They are working for every office to hold gate
meetings with dispute updates on 7 November)

That meeting was a great sign that Labour is now taking up support for workers in dispute – the other main discussion, again unanimously backed, was on support to the “McStrikers”.

To maintain support after the scandalous court judgement on 12th October, that stalled the dispute for now, activists are still working together to keep the Party up-to-date and stressing the need for continuing solidarity. We’ve produced and distributed hundreds of fliers to members’ homes with the support of the CWU setting out the case for action.

We are rebuilding our movement from the bottom up – a great byproduct of work to support the CWU is that they are now enthusiastic backers of our campaign to re-launch a local Trafford Trades Council very soon.

Notes
1. That Royal Mail workers have voted 89.1 percent, on a 73.7 percent turnout of the 110,000 Communication Workers’ Union members in the company, to hold national strikes to push back the company’s drive for an increasingly casualised and hard-driven workforce. Their first strike, for 48 hours, will take place from 19 October.
2. That the CWU is seeking to defend its members’ pensions, prevent a later working day, win a 35 hour week with no loss of pay to spread the benefits of automation, defend union agreements and win a decent pay rise.
3. That the Royal Mail bosses have obtained an injunction, delaying the dispute – but it is still very much on.

Believes
1. That this is an important fight, in which the Royal Mail workers will need support from the whole labour movement.
2. Labour and other unions should mobilise at every level to support them, linking this to a vocal and active public campaign for renationalisation of Royal Mail.
3. That a renationalised Royal Mail should be democratically reorganised to benefit its customers and workforce, along the sort of lines advocated by Jeremy Corbyn in his first leadership election and in his speech to this year’s Labour conference.

Resolves
1. To circulate this resolution to all members and send it to the NEC.
2. To ask our MP and councillors to make clear statements in support of the Royal Mail workers.
3. To invite a CWU activist to speak at our next meeting.
4. To approach other labour movement organisations to organise a local solidarity meeting with a view to organising ongoing campaigning in support of the Royal Mail workers.
5. To organise visits to local picket lines.
6. To take a solidarity photo at this meeting.
7. To welcome the unanimous decision of this year’s party conference to repeal all anti-union laws, and raise the issue of how the law is used to prevent unions from taking industrial action.