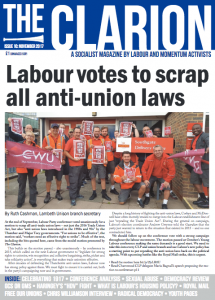 CONTENTS INCLUDE: • Labour votes to scrap all anti-union laws, by Ruth Cashman • Labour conference report: the world (partly) transformed, by Maisie Sanders and Sacha Ismail • John McDonnell welcomes Ukrainian miners to Parliament, by Chris Ford • Parliament and sexual abuse, by Rosie Woods • Behind Momentum’s NEC selection process, by Michael Chessum • Democracy review: learning from the past, by Simon Hannah • Why the left should support delegate GCs, by Maria Exall • Fighting to stop Haringey’s “HDV” sell off, interview with Phil Rose • Labour councils and cuts • Labour and housing after Grenfell, by Glyn Robbins • Labour needs a “radical program of action”, by Martin Wicks • The Russian revolution and us, by Steff Grainger • What it means to be a revolutionary, by Rida Vaquas • 1918: BSP calls for solidarity • Get your Labour Party to support the posties, by Nik Barstow • After the injunction, keep up the momentum! by a postal worker • The Single Market rules out nationalisation, by Danny Nichols • Release trade unions from their chains, by Maria Bagnall • Labour and pay restraint, by Chris Walentynowicz • CLPs build Picturehouse solidarity, by a Picturehouse worker • Chris Williamson MP on democracy, the economy and stopping expulsions (interview) • Radical democracy and 21st century socialism, by Janine Booth • Free education within our reach – Join the 15 November demo! by Sahaya James • Repression in Catalonia • YOUTH PAGES: • Young Labour policy conference report, by Alex Stuart • Labour should lead on free movement, by Nadia Whittome • Where is NUS? by Anastazja Oppenheim • Take the stress out of studying! by Joe Booth • Campaigning on mental health, by Andrew Tromans