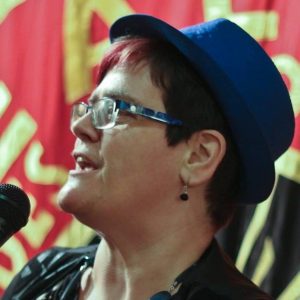 At The World Transformed festival running alongside Labour Party conference, Clarion supporter Janine Booth spoke to a packed meeting on “Radical democracy and 21st century socialism”, on a panel with Jeremy Gilbert, Jon Lansman and Clive Lewis MP. This is what she said.

Thank you for inviting me to what promises to be a very interesting debate. In my opening contribution I’ll make three points: one, about democracy and socialism; two, about why democracy is about participation, not just about yes/no plebiscites; and three, about why debate, discussion and democracy is a better way of progressing on issues than disciplinarianism and exclusion.

Democracy is an essential part of socialism. It is not some little add-on, something that’s nice to have, or something you do because people say that you ought to. You cannot have socialism without democracy. Where that’s been tried, in countries that call themselves socialists but are not democratic, those countries are not socialist. Not only can you not have socialism without democracy, but you also can’t have democracy without socialism. That’s why Karl Marx was a democrat before he was a socialist: he became a socialist as a result of thinking through how to get democracy. The society we live in at the moment has a very limited democracy. Yes, it’s better than living under totalitarianism; but electing MPs once every five years, who can then do what they want, who can form a government despite getting less than a quarter of the votes; then pass laws saying you can’t go on strike unless you get turnouts and percentages of support higher than they’ve ever got – all presided over by an unelected civil service, a monarchy and an unelected second chamber – that is not democracy. We aspire to a better democracy than that.

So it is important that we have policies for the radical democratisation of society. In the first place, the repeal of the anti-trade union laws, not just the 2016 Trade Union Act, but all the anti-trade union laws that came before that. We need industrial democracy. It’s great that we have a leadership that’s finally ready to renationalise the railways – I work on the railways – but we need more than that, and actually Jeremy and John have made comments hinting at more than that. What we need is the railways under public ownership, under democratic workers’ and passengers’ control.

We need our MPs to be elected more often; we need them to be recallable; we need them to be on a worker’s wage; we need to abolish the monarchy; and we should replace the House of Lords. We need electoral reform, we need votes at 16, and we need time off work to vote. In fact, we need a shorter working week in order to enable more participation in politics. We need the right to protest; we need to take direct action – and democracy, yes, sometimes involves breaking bad laws. From the Poplar Rebellion a hundred years ago, to the Poll Tax more recently, to climate change activists now, blocking the way to fracking – breaking bad laws is very much a part of our movement.

So, democracy requires participation. If we didn’t know before, we surely found out during the EU referendum, that yes/no plebiscites are not an adequate form of democracy. All they enable you to do is vote yes or no to a question posed by somebody else, in somebody else’s interest that you’ve had no part in putting together. What we need is active, informed participatory democracy, and we need to look at what’s getting in the way of that and therefore how we can increase it.

Therefore, in our movement, we need more political education, so that people feel knowledgeable enough and confident enough to take part in democracy. We need events and meetings that are accessible – physically accessible for starters, and I think this venue could do with a lot of improvement – that are accessible to people with sensory impairments and so on. We need to talk about transporting people to and from our meetings, arranging childcare, looking at the timing of meetings – having just come off a night shift myself, I am quite keen on that particular one. We need our meetings to be more participatory, more interesting: we have to do away with the jargon and bureaucracy, and we need a movement where, online or elsewhere, there are standards and a culture of comradely debate. There is a rule in football where you have to play the ball, not the player. If you play the player instead of the ball you get sent off. You should have a similar rule in politics. Argue with people’s politics, not with them.

One of the questions posed in this event is, can digital technology help with this? My answer would be: can digital technology help? Yes it can. Can digital technology replace participatory forums and decision-making meetings? No, it can’t. We are now a year on from a discussion in Momentum, where the idea of online digital plebiscites about policy decisions was touted as a great participatory way forward. A year has passed since then, and there haven’t been any online policy decision-making votes in Momentum, at all. So the people who were telling us what a great idea that was, I am sure, some of you must be very disappointed in that. 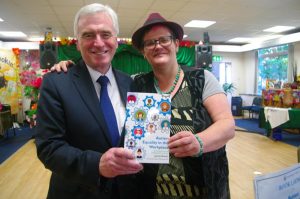 (Janine with John McDonnell, who wrote the foreword to
her book on Autism Equality in the Workplace)

Of course digital technology is exciting and it helps you do things. But there are some facts you need to think about. More than 5 million homes in the UK do not have internet access. More than 16 million people aged 16 and above do not have basic online skills. Only 55% of disabled people access the internet as against 83% of non-disabled people. People often say, “Ah! Digital technology! Online voting! That makes the process more accessible to disabled people.” It doesn’t. Mobility-impaired people are the most likely to live alone and be on a low income, and they are among the lowest-level internet users. Our message to those people needs to be: “How can we help you get to our events? How can we help you access our democracy?” Rather than, “Don’t worry; stay at home; no need to go interact with anyone, just click here.”

I am a fan and a user of digital technology. But my view of it in politics is similar to my view of it where I work on the railways. It is that it can be helpful, used alongside people and face-to-face contact. But on the railways we’ve had to fight employers using digital technology as a way of replacing human interaction and face-to-face contact. I don’t think we should allow that to happen in politics.

My third point is that democracy, discussion and debate is a far better way of progressing politics than disciplinarianism, exclusion, and censorship. I think censorious attitudes have got too much of a grip within the left and the labour movement at the moment, and there’s a too-common attitude that says, “I don’t like what you say, I find it offensive, so I’m gonna ban you, or expel you, or refuse you a platform”, or, in its milder form, “ritually denounce you.” What we’ve got, unfortunately, is a breed of what you might call ‘how-very-dare-you politics’. One example of this that I see within the Labour Party is “how very dare you suggest that members be able to choose their Labour candidate?” That, really, is all that mandatory reselection amounts to. And I can’t understand why it’s controversial. If I get a post in my trade union, I’ve got to re-stand for that post every year. You don’t see me, or the other thousands and thousands of trade unionists who do that, going, “How very dare you? I ought to be in a job for life.” All we’re asking MPs and candidates to do is to do that once every five years! Do something that the rest of us are doing every year.

And then also, when we do have a genuine issue – for example, I do think that there is a genuine issue and a problem of anti-semitism in the labour movement and the left – with very few exceptions, by far the most effective way to tackle that is through political education and debate. Vigorous and challenging debate to challenge the views that people have a problem with, and explaining why they’re wrong, rather than creating martyrs out of people and not taking the issue forward.

Comrades, we have an opportunity. It has been through member-led democracy that we’ve pushed the Labour Party back in the right direction, to the left. If we are going to keep that momentum (ahem), then we must put our own house in order; we must become more democratic ourselves, and if we do, I can see an exciting future ahead.