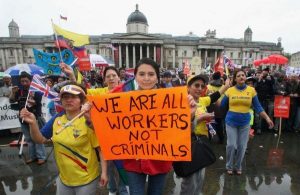 The Labour Party was founded as the party of workers, not migrant workers vs British workers.  It is this founding principle of international solidarity, and an evidence-based outlook, that must guide our Brexit policy-making.

Our fight should not be against immigrants, but the economic and employment conditions that allow anti-immigrant rhetoric to thrive and strike a chord with Labour supporters.

Since 2010 the UK has seen plummeting pay and working conditions, stretched public services and the biggest housing crisis since 1920.  We must have the courage to place the blame for this crisis squarely where it lies: an ideological programme of Tory austerity, that promotes the interests of multinationals and unscrupulous employers above that of the people.

A motion to ‘Defend and Extend Free Movement’ was debated at National Youth Policy Conference.  This presented a unique opportunity for Young Labour members to demand only the most progressive Brexit deal.  The motion fell, with arguments against citing the myth that migration lowers wages; and stating the need to heed immigration concerns, and prioritise electability.

The Labour movement clearly needs to rebuild support for free movement, but how can we do this without firmly and forthrightly supporting it ourselves?

As Diane Abbott argues in Freedom Movement and Beyond: Agenda Setting for Brexit Britain, an injury to one is an injury to all and we hold power in unity.  It is imperative that we do not allow the Conservatives and global right wing to undermine workers’ rights by dividing the working class.  Migrants are central to our struggle and scrapping free movement not only alienates them but weakens the Labour movement.

A feat of Corbynism has been its break from apologism on Labour’s economic and migration policy values.  It’s one of the reasons I began galvanising support for Jeremy from the moment he announced his leadership bid in 2015.

We’ve slowly learnt that the left will never win the argument by conceding ground to the populist right.  My generation will not forgive us if we give them a free pass at the most critical point in history of our lifetimes.

In two years we’ve shifted the economic ground to an anti-austerity argument.  Let’s now have the guts to reframe the immigration debate.

For Labour to be electable not just in five months or five years, but in 25 years, we must be on the right side of history in 2017 on Brexit and free movement.

• Nadia was a delegate to youth policy conference. She is a trade unionist, care worker and student, and is seeking to be Rushcliffe’s Labour PPC