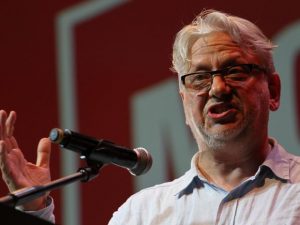 Having made it onto the shortlist of 7 after 48 applications, I nervously awaited the email. “The panel had to select possible candidates from an extremely strong field”, it eventually read. “After much consideration…”  Had I applied for a job? Perhaps I had put myself forward to be a trustee of some third sector organisation?

No – this was my rejection email from Momentum’s selection process for candidates for the Labour Party’s National Executive Committee. The NEC is Labour’s most senior internal committee, at least in theory appointing senior staff, interpreting rules and deciding on processes around things like selections. With party conference having just established three additional seats to represent members, Momentum immediately set up a process to determine its preferred candidates.

The problem was not who this process did and didn’t select. I’m not under any illusions that I’m the best the left has, and the decision to back Jon Lansman over me (you can only have one white man from London on a slate of three) is pretty inevitable.  Neither is it that the process was obviously rigged, given that it allowed a prominent critic of the organisation’s new constitution to make the shortlist. The problem is that the process lacked any kind of democracy – entirely unnecessarily.

Time was tight to get candidates selected, but Momentum is a big organisation with more than 30,000 members and a fair amount of office capacity. A call for nominations and an online vote would require little more administration than an application process. This is what unions and other political organisations do very regularly, and it is what Momentum already does with its own (limited) internal elections. A quota system could easily have produced a slate that was balanced geographically and in terms of liberation strands.

Instead, applicants were given less than 48 hours to complete the application form! Whereas an election might need a 500-word statement, this process required you to provide a full professional and political CV, and to answer several 250 word questions. My application contained over 3,000 words, ran to several pages and took me a number of hours. Hardly an accessible process, and, on some levels, a worse process than the Labour Party’s. The party machine might be able to stitch up shortlists, but it’s members who get the final say. No such luck in Momentum.

It ought to go without saying that having a democratic system for selecting candidates is vital. Being on the Labour NEC is political role – and there are differing perspectives within the left about policy, democratic reform and expulsions. The idea that you can boil it down to a job-style application process is insidious, because one political perspective (that of whoever is in a majority in the process) will get to define what “competence” is.

If I’d been able to, I’d have run for NEC on a political platform. I’d have been a vocal advocate for free movement and migrants’ rights; for an orientation towards workers and communities in struggle; and for an inclusive party that debates ideas rather than expelling this or that group. Where much of the Labour left has accustomed itself to tweaking the party’s arcane democratic processes, I’m much closer to the rip-it-up-and-start-again brigade. We should be going much further than reversing Blair’s legacy.

Why am I pointing all of this out? Certainly not to have a go at Momentum’s staff or any individuals in the organisation. Rather, I think what this episode demonstrates is something wrong  with the way that Momentum is intervening in Labour. The idea that we can select candidates simply on the basis of competence, without a proper political debate amongst ourselves, is utterly self-defeating.

In the years that come, the Labour left will have to do much more than win elections, internal or otherwise. It will have to contend with compromise from the leadership, sabotage from sections of the Party, and an all-out war from big capital. To rise to that challenge, we will have to become a political movement that can debate its ideas openly. This isn’t just a matter of principle: it is the only way we have of identifying the best and most coherent policies.

Sooner, rather than later, Momentum must become a home for all of the left’s ideas and strands, not just a fiefdom for one of them. That starts with having a basic level of internal democracy, including in candidate selection.

• Michael is a member of The Clarion‘s editorial board. He sat on the old Momentum National and Steering Committees abolished by the coup in January.